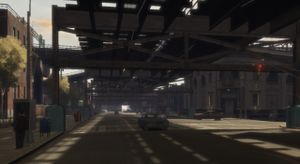 Mohawk Avenue is a main north-south street in Broker, Liberty City, where it's central to missions early in the game. It runs from the southern end of BOABO in north to the southern end of Hove Beach in south. It is one of, if not, the longest road on the eastern side of Liberty City. The avenue acts as the main shopping street and economic core of the Hove Beach district from where it begins at Crockett Avenue until the junction with Cisco Street in northern Hove Beach. Businesses along here include the Russian Shop and Comrades Bar. The Broker Safehouse is also located along this section of the Avenue. Mohawk Avenue then continues north, skirting the eastern boundary of the East Hook district. As it enters the wealthy Rotterdam Hill neighbourhood, the road briefly becomes Onion Street for one block before changing back to Mohawk Ave, where it passes Broker's fire station on the intersection with Dillon Street. Niko Bellic's first girlfriend Michelle lives along the next section of this road in the central part of Rotterdam Hill. The road then begins to slope downward, and passes underneath the Algonquin - Dukes Expressway, before rising back up again and passing Jermaine Andrews' residence in the more run-down part of northern Rotterdam Hill. Mohawk Avenue terminates a few yards beyond here, just inside the BOABO boundary on the intersection of Brunner Street.

Mohawk Avenue is a dark and noisy road in many of its sections, mainly due to the Broker Line subway running above on elevated train tracks. The elevated tracks pass over Mohawk Avenue in Hove Beach, East Hook and parts of Rotterdam Hill.

Retrieved from ‘https://www.grandtheftwiki.com/index.php?title=Mohawk_Ave&oldid=355751’
Categories:
Cookies help us deliver our services. By using our services, you agree to our use of cookies.