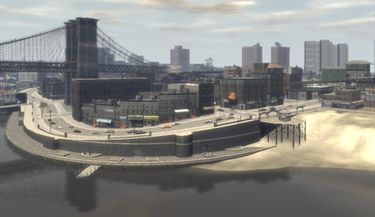 South Hove Beach, as viewed to the northeast from the mouth of the Humboldt River. Broker Bridge passes over the neighborhood.

Hove Beach is a neighborhood in southern Broker, Liberty City. It is bordered to the northeast by the Algonquin-Dukes Expressway (South Slopes); to the north by Gibson Street (Outlook); to the northwest by Cisco Street and Delaware Avenue (East Hook); to the west by the Humboldt River; to the south by Crockett Avenue (Firefly Island); and to the east by Onondaga Avenue (Firefly Projects). It is a has a very large population of Eastern European immigrants such as Russians, Polish, Ukrainians, Serbs, and Albanians.

Niko Bellic's first home and safehouse is in his cousin Roman's apartment in Hove Beach.

Hove Beach is based off of Brooklyn's Brighton Beach neighborhood, known for its Eastern European population. This is in reference to Hove, England's proximity to, and relationship with, neighbouring Brighton. The two, having city status, are officially known as Brighton and Hove. Hove is also a nickname of Jay-Z, who hails from Brooklyn.

People and places of interest

During the first leg of GTA IV, Niko's aforementioned cousin, Roman Bellic operates a taxi depot at Cisco Street and Iroquois Street, which would later be destroyed during "Roman's Sorrow". Aside Roman, Vladimir Glebov owned a bar in the neighborhood. Mikhail Faustin and his partner, Dimitri Rascalov control a large part of Hove Beach, as Russian Mafia presence is high.

In addition to serving as the location for the player's first safehouse in in GTA IV, Hove Beach contains other places of interest. The Perestroika cabaret club is located in the northern end of the neighborhood, on Tulsa Street. Mohawk Ave, one of the neighborhood's main drags, is home to a Russian-owned clothing store at its intersection with Bart Street. Also on Mohawk Avenue are the neighborhood's police precinct (at Oakley Street), Vladimir Glebov's Comrades Bar at Mohawk Avenue (across the road from the safehouse), and The 69th Street Diner also at the Bart Street intersection.

Access points to the Broker Bridge, either on foot or in a road vehicle, are located within Hove Beach. The stairway leading up to the walkway on the bridge is connected to a block in Hove Beach directly under the bridge between Iroquois Avenue and Mohawk Avenue. Vehicle onramps to and from the bridge are situated at Oneida Avenue, just south from Outlook.

The Liberty City Subway serves the neighborhood. The eponymous station is located at the intersection of Wappinger Avenue and Crockett Avenue. The 3/8 Broker Line serves the station, providing service to Francis International Airport and Algonquin.

Retrieved from ‘https://www.grandtheftwiki.com/index.php?title=Hove_Beach&oldid=411866’
Category:
Cookies help us deliver our services. By using our services, you agree to our use of cookies.