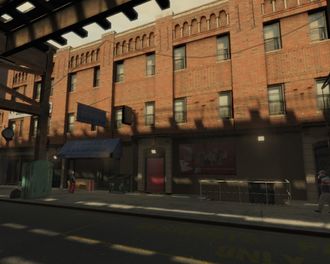 The exterior of the Broker safehouse, forming part of a row of identical buildings.

Getting and losing the safehouse

Located near the southern end of Mohawk Ave in Russian-influenced Hove Beach, the apartment was Roman Bellic's initial place of residence (after spending a period of time living in his taxi depot), and was offered as a place of accommodation for Niko upon his arrival in Liberty City, to Niko's dismay as he found Roman was not living in a mansion as claimed in Roman's letters and e-mails.

During the mission "Roman's Sorrow", the apartment and Roman's cab depot are burnt down by the Russians. The two cousins then escape to Bohan, where Mallorie has a place for them. While the Broker safehouse is effectively inaccessible after the mission, vehicles may still be stored at its parking space outside.

The safehouse (along with the depot) can still be found undamaged in The Lost and Damned prior to completion of "It's War", when news of events in "Roman's Sorrow" is reported. Because events in The Ballad of Gay Tony begin during "Three Leaf Clover", well after Niko and Roman's escape from Broker to Bohan, both the safehouse and the depot are burnt out throughout The Ballad of Gay Tony. In both DLC's, however, the parking spot outside can still be used to store vehicles.

The safehouse is rudimentary, with a futon (sofa-bed) which acts as a save point, a television, a table with a dirty kitchen, a radio and a wall which is peeling off. A design poster of a blue Banshee with a white stripe can be found in the house, as are numerous posters of scantly clad women. There is a picture of Mallorie Bardas, Roman's girlfriend, on the bedside table. There is another one photo of young and pretty slim Roman with her in the commode nearby. There is an inaccessible door in the corner of the kitchen, presumably leading to the bathroom.

Retrieved from ‘https://www.grandtheftwiki.com/index.php?title=Broker_Safehouse&oldid=378513’
Categories:
Cookies help us deliver our services. By using our services, you agree to our use of cookies.