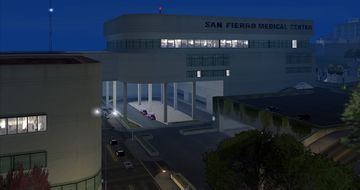 The main block of the San Fierro Medical Center in GTA San Andreas.

The San Fierro Medical Center is the main hospital servicing San Fierro, San Andreas. It is located in the Santa Flora district, just north of City Hall, west of Chinatown, and south of Palisades and Juniper Hill.

The medical center is the largest hospital in San Andreas, essentially consisting of a large complex of three modern buildings partially connected by a skybridge, and boasts a massive two-level carpark and driveway for ambulances. Players will respawn at the hospital if they are killed anywhere within San Fierro city limits. Alternately, if the player dates Katie Zhan and dies within 0.9 miles (1.5 km) from her house, the player will respawn at her home instead.

Vehicles that commonly spawn at the hospital include up to two Ambulances at the driveway, a Romero's hearse, and two random vehicles in the lower carpark, and a Maverick and Raindance on the roof of the main medical block. The upper carpark may spawn up to three random vehicles.

Prominent use in mission

The hospital is prominently featured during "Wear Flowers in Your Hair" as one of several stops where The Truth observes mysterious vans leaving. The nature of The Truth's actions or the vans are never explained.

Retrieved from ‘https://www.grandtheftwiki.com/index.php?title=San_Fierro_Medical_Center&oldid=414074’
Categories:
Cookies help us deliver our services. By using our services, you agree to our use of cookies.