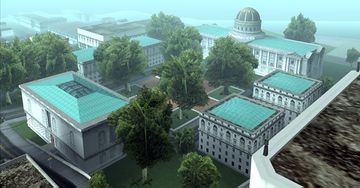 City Hall, San Fierro, as viewed to the southwest in GTA San Andreas. 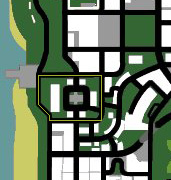 This district is frequented mainly by civil servants and the residents of nearby Queens. Taxis and Stretches can also be seen in this area, suggesting the variety of visitors to the city's civic center.

The general area is a re-creation of San Francisco's Civic Center, which similarly encompass a concrete plaza surrounded by Beaux Arts/Edwardian architecture. The city hall building is a toned-down replication of the San Francisco City Hall, while the museum is derivative of the Asian Art Museum of San Francisco; the four lesser structures on the northern and southern sides of the plaza appear to borrow elements from the Earl Warren Building (old California State Building).

Retrieved from ‘https://www.grandtheftwiki.com/index.php?title=San_Fierro_City_Hall&oldid=362496’
Categories:
Cookies help us deliver our services. By using our services, you agree to our use of cookies.