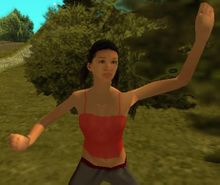 Katie Zhan is a character in Grand Theft Auto: San Andreas. She is one of protagonist Carl "CJ" Johnson's possible girlfriends. She is a nurse who also spends her spare time at the karate dojo in San Fierro, San Andreas. She is fascinated by automobile accidents and is easily aroused by reckless driving as evidenced by her apparent ecstasy each time Carl performs a jump inside a vehicle or crashes into something.

Katie is voiced by China Chow.

She can initially be found at the northeast corner of Avispa Country Club at the south end of the city, practicing martial arts behind some bushes. She can be seen easily from the road. Katie likes men with sex appeal and muscle, so bulk up before asking her out.

Katie lives in the Juniper Hollow district of San Fierro, at the northwest corner of the city, just southeast of the Gant Bridge.

Retrieved from ‘https://www.grandtheftwiki.com/index.php?title=Katie_Zhan&oldid=418636’
Categories:
Cookies help us deliver our services. By using our services, you agree to our use of cookies.