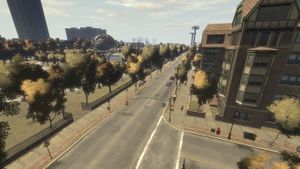 Stillwater Avenue is a north/south street in Dukes, which runs through the districts of Meadows Park, Meadow Hills, Cerveza Heights and Beechwood City. The south end starts as an overpass off Carson Street, not far from the Beechwood City Burger Shot on Carson, then runs against the Lynch St. Station in Cerveza Heights. It then goes into Meadow Hills, as explained earlier, and runs along side Meadows Park, then becomes a public footpath alongside the Liberty State Pavillion Towers.

From north to south

The Sabre GT, wanted by Stevie, can be found just off the Stillwater Ave/Tudor St junction, on a driveway

Retrieved from ‘https://www.grandtheftwiki.com/index.php?title=Stillwater_Ave&oldid=375731’
Categories:
Cookies help us deliver our services. By using our services, you agree to our use of cookies.