Considered a successor to the Sabre Turbo from Grand Theft Auto: Vice City and Grand Theft Auto: Vice City Stories, the Sabre GT borrows bits and pieces from various American muscle cars. The back and sides resemble a 1970 Oldsmobile Cutlass [1] - but the sides have softer lines and could be from '68/'69 Chevrolet Chevelles, the grille has a resemblance to a 1970 AMC Rebel, the front is similar to a 1970 Buick GSX [2] (the headlights and the shape of the bumper is also very similar to a 1970 Cutlass) and the front bumper's round turning signals are similar to a 1968 or 1969 Dodge Coronet.

The wheels appear to be based on those found on Pontiac Firebirds during the 1970's. The paintjob seems to look like that of a Mustang Mach 1 with some characteristics of a Shelby Mustang. The different hood scoop on some Sabre GTs resembles that of a 1968 Shelby Mustang, while some resemble the 442 Cutlass. Overall, the look created emulates the GM big body V8 coupes of the early 70's (Cutlass, Skylark, Chevelle). The Sabre GT has a different Declasse logo than the makers other cars, being an older design, a circle with "Declasse" written around the inside edge.

The stripes featured on some Sabre GTs look much like the ones on the Sabre Turbo, except the stripes do not continue all the way down the hood to the front of the car. Side stripes with "Sabre Turbo" labels are also featured on the lower sides of the car, just in front of the rear wheels. Sabre GTs may also appear with a hood bulge or a large hood scoop with visible hood clips and wires.

The engine is a turbocharged 550 cubic inch (9 liter) V8, and it definitely sounds like it, with the turbo whistle evident at higher RPM. "550ci" decals are featured on the boot lid, front fenders and on the hood stripes. There are several iterations of the Sabre GT, but these are cosmetic in nature: some feature a plain hood, others feature a cowl (reverse) scoop on the hood for the air filter with a "TURBOCHARGED" badge on either side, and some feature a more aggressive forward-facing scoop on the hood, which also has steel quick-release pins to keep the hood from flying off under high speed. The engine is comparable to a Dukes in horsepower, but with slightly less torque, allowing for fast acceleration with the wheels seldom breaking loose under full throttle. Because of the minor torque deficit, it's a bit harder to get the Sabre GT to spin both its wheels on dry tarmac. The exhaust note is unique to the Sabre GT, and it shares its horn with the Sabre. Both can be recognized immediately, although the exhaust note may also be noted as more closely resembling the Stallion, however when heard from the rear of the car, it seems muted in comparison to the Stallion, possibly because of the turbo. However, when heard from the front of the car, the whistle of the turbo and the roar of the 550ci V8 is distinct.

The Sabre GT rolls plenty through corners and has a strong tendency to understeer. This is particularly evident during hard braking; the car simply dives forward, sometimes enough to damage the front spoiler. The brakes also have a very heavy front bias, meaning more understeer during braking, but the upside of this is that there's no lock-up of the tires, meaning more consistent braking. Players may therefore take advantage of the progressive brake controls on the Xbox 360 or PS3 controllers, in order to avoid brake lockups. However, it handles far better than the Dukes or Stallion. It has a top speed of 150 km/h (93 mph).

The Sabre GT also proves tolerant to rain-slicked roads, if the driver does his part. Since the suspension allows for a low ground clearance (combined with the body-roll during cornering and braking), it is not uncommon to find nicks and scratches along the undercarriage due to scraping against uneven road surfaces and potholes, even when one attempts to drive conservatively. The front spoiler is prone to scraping when hitting hills, crests and bumps in the road, and may even break the turn signals mounted on either side of the front spoiler.

A Sabre GT is wanted by Brucie and Stevie for their export businesses. The Sabre GT wanted by Stevie can be found in a driveway near Meadows Park. It is seen in a unique lime green with a dark greenish-blue stripe and pearlescent tint.

There is also a variant of the Sabre GT with a unique paint-job, which has a brown two-tone scheme (top of car including roof, hood, and trunk is colored light brown while doors and quarter panels on all corners are colored dark brown) with cream colored decals. It is an attractive but rare color scheme that makes the car look more classic.

Another, somewhat less rare color variant of the Sabre GT is a dark forest green body color and darker green stripes. Both colors seem to be done in metallic paint with metallic flake that looks black at some angles, making the car stand out against other Sabre GTs. 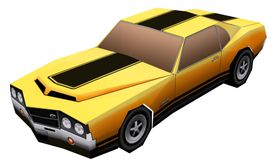 Retrieved from ‘https://www.grandtheftwiki.com/index.php?title=Sabre_GT&oldid=396725’
Categories:
Cookies help us deliver our services. By using our services, you agree to our use of cookies.