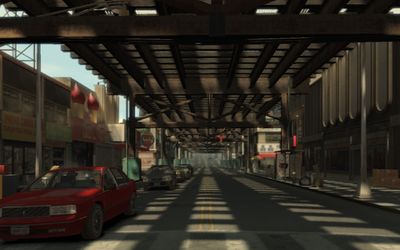 Huntington Street, which is overshadowed by an elevated line, similar to Hove Beach's Mohawk Avenue, is the main thoroughfare of Cerveza Heights, cutting across the heart of the area.

Cerveza Heights is based on the New York City neighborhoods of Jackson Heights, Flushing, and Corona (incidentally cerveza is the Spanish word for beer and Corona is the name of a famous Mexican beer) in Queens. Like it's real life counterparts Cerveza Heights is ethnically diverse with notable Chinese, South Asian, Italian, and Latino communities. It serves as the Spanish Lords' base of operations in the Dukes and Broker area. Members of the Mafia can be seen hanging outside the Cluckin' Bell. These are presumably members of the Messina Family since they are the Mafia controlling Dukes.

The building on the west side of the neighborhood, next to Dukes Boulevard, has heavy amount of graffiti. Some of the graffiti are from game arts from Grand Theft Auto III and Grand Theft Auto: Vice City. Artworks from GTA III include 8-Ball, Misty, El Burro, a Diablos emblem, and a Yardie gang member, and artworks from GTA Vice City include a motorcycle.

The Liberty City Subway has a stop at the intersection of Charleston Avenue and Huntington Street. It is served at all times by the Broker Line.

Retrieved from ‘https://www.grandtheftwiki.com/index.php?title=Cerveza_Heights&oldid=355993’
Category:
Cookies help us deliver our services. By using our services, you agree to our use of cookies.