The first appearance of Burger Shot (as "The Burger Shot") at the North Point Mall, Vice Point, Vice City in GTA Vice City.

Burger Shot first appeared in the form of "The Burger Shot", a rudimentary restaurant in GTA Vice City (among many other less known outlets) where the player can replenish their health if it is below 100 points. The restaurant risen in prominence in GTA San Andreas, where the restaurant becomes a large chain based in multiple locations. In addition to replenishing health, Burger Shot in GTA San Andreas allows the player to eat from a range of set meals in order to eliminate their hunger, or accumulate fat by eating fatty food. Burger Shot is absent as a restaurant chain in GTA Liberty City Stories and GTA Vice City Stories. However, it is mentioned in radio commercials in GTA Liberty City Stories, as well as holding a tie-in with V-Rock in GTA Vice City Stories (giving away V-Rock stickers).

Burger Shot is retained as a fast food chain in GTA IV, but is downgraded as a location where the player can only replenish their health as player customization is limited; players can purchase a $1 "Bleeder" burger at any Burger Shot restaurant for full health. The player can download a Burger Shot background for their upgraded phone via Vipluxuryringtones.com. Burger Shot operates its own website, Burgershot.net; certain Benson trucks also carry the Burger Shot logo. In Episodes from Liberty City, the Burger Shot and Weasel merchandise a menu with Republican Space Rangers action figures.

While it is impossible to access Burger Shot outlets in GTA Chinatown Wars, players can obtain food prizes from Burger Shot in the form of fries or burgers for health by purchasing its scratch cards.

Discarded Burger Shot bags can be seen in the trailer for GTA V, implying the company will be present in the game.

Originally, The Burger Shot in GTA Vice City lacks any readable menus, although it still does display images of a variety of burgers, sandwiches and side dishes. Burger Shot in GTA San Andreas, however, offer the player four meals, each with different quantities of fats, with one meal, the Salad Meal, lacking any fats. The names of two meals relate to homosexuality; "beef tower" is slang for naked men stacked together and "meat stack" is pornographically-defined for women having sex together. In Las Venturas outlets, the pricing of the Beef Tower, Meat Stack and Salad Meal are 20% higher than in the rest of the state, as noted below:

A Burger Shot menu in GTA IV with several choices unavailable to the player.

In GTA IV, the player can only purchase a $1 "Bleeder" burger, and outings with friend or girlfriends to Burger Shots will nominally cost even higher at $100. It is interesting to note Burger Shot tills, as well as burgershot.net, also promote four meals on menus in a similar fashion as what is offered in GTA San Andreas, although only the "Bleeder" burger is available and consists of only a single burger costing $1:

In GTA Vice City, The Burger Shot exists in Vice City as only two outlets within North Point Mall in Vice Point alongside another three outlets (the Beef Bandit, Cheesy Crust Pizza and Shaft Hot Dogs) on both the east and west sides of the mall.

In GTA San Andreas, Burger Shot is interestingly confined within the limits of San Andreas' three major cities, Los Santos, San Fierro and Las Venturas, and as a result is not found in rural San Andreas.

There are ten Burger Shot outlets in total; two in Los Santos, three in San Fierro, and five in Las Venturas (the largest number of operational fast food outlets within a city in GTA San Andreas). Old Venturas Strip itself has two Burger Shot outlets that are only a short walk from each other.

In GTA IV, Burger Shot operates a total of ten outlets in and throughout Liberty City alone, including two integrated mini-restaurants at the city's two Memory Lanes bowling alleys, and one shuttered outlet in Cerveza Heights, Dukes. They include as follows: 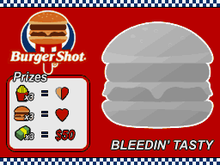 In GTA Chinatown Wars, scratch cards promoted by Burger Shot can be purchased at various stores, and the player can win cash or free food.

During the events of GTA San Andreas, the Marina Burger Shot in Los Santos is a significant location for several missions, where it temporarily becomes a place of employment of Jeffrey "OG Loc" Cross, who starts working as a "hygiene technician", actually a janitor, as part of his parole arrangement. It is from this restaurant that Loc asks for protagonist Carl "CJ" Johnson's help to kickstart his rapping career. In addition, the Redsands East Burger Shot in Las Venturas features a parked Faggio that is used to perform a courier side-quest with the Burger Shot outlet as the nerve center where the player refills his stock of "merchandise." Upon completion of the side-quest, the outlet becomes an asset that pays the player $2,000 a day.

In GTA Chinatown Wars, the Beechwood City Burger Shot is where the player meets with Lester Leroc for his strand of missions.

Retrieved from ‘https://www.grandtheftwiki.com/index.php?title=Burger_Shot&oldid=418025’
Categories:
Cookies help us deliver our services. By using our services, you agree to our use of cookies.