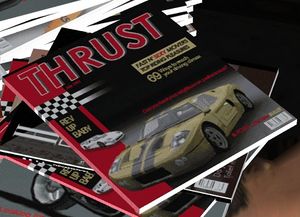 An edition of the Thrust magazine in Grand Theft Auto: San Andreas.

Thrust is an automobile magazine that appears in the various safe houses owned by Carl Johnson in the state of San Andreas. The magazine appears in Grand Theft Auto: San Andreas. A unique Bullet appears on the front page of the edition visible during GTA San Andreas. The most distinctive difference about the Bullet is that it has twin stripes instead of the normal singular variety. This is probably due to the beta version Bullet having twin stripes, yet it was changed to a single stripe probably so as not to appear identicle to the Ford GT.

Retrieved from ‘https://www.grandtheftwiki.com/index.php?title=Thrust_(magazine)&oldid=399085’
Category:
Cookies help us deliver our services. By using our services, you agree to our use of cookies.