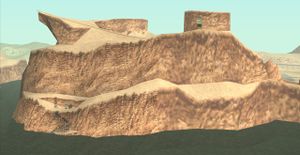 Arco del Oeste is a rock formation in Grand Theft Auto: San Andreas at the northwestern edge of Bone County, San Andreas, just south of Valle Ocultado and west of Las Brujas and El Castillo del Diablo. It juts into Sherman Reservoir, providing pristine views of nearby Sherman Dam to the south, and features a natural arch and a mesa, an abandoned mining facility, wooden shacks to the top, and a small dock on the southwestern side.

Its name translates roughly from Spanish as Arc of the West, apparently taking its name from its natural arch and location towards neighboring Tierra Robada. 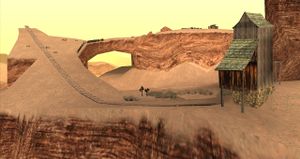 The abandoned mine at the top of Arco del Oeste, which runoff (towards the left) is designed ideally to serve as a ramp for stunt jumps.

Retrieved from ‘https://www.grandtheftwiki.com/index.php?title=Arco_del_Oeste&oldid=364869’
Categories:
Cookies help us deliver our services. By using our services, you agree to our use of cookies.