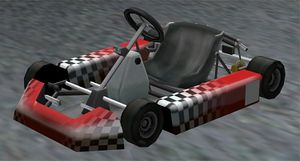 The Kart is a go-kart in Grand Theft Auto: San Andreas.

As implied by name, the Kart is a small low-profile go-kart constructed with the barest of materials and is a one-seater capable of carrying only the driver. The vehicle is usually depicted with bare frame and a frontal bumper, but may also be available with additional matching side skirts. Other features include its rear engine and small racing slicks.

Being very compact, the Kart's low-powered engine is adequate in providing the vehicle with average speed, good acceleration and good mountain climbing, and allows the go-kart to execute sharp turns and brake in very short distances. However, these traits may also work against the maneuverability of the vehicle, as the steering is overly sensitive (thus requiring the player tap the steering controls instead of holding it), and the vehicle's low profile and light weight makes drives onto curbs or crashes into larger, heavier vehicles risky as the vehicle may spin out or flip.

Unusually, being a fully exposed vehicle, the player cannot dismount from the Kart during violent crashes or flips; neither can the player shoot forward, despite the Kart having a clear frontal field of view to do so.

The Kart is unusual in that it only spawns at specific areas in San Andreas after completion of a mission, specifically, "Cut Throat Business". These locations include:

Before "Cut Throat Business", the Kart is also used as the principal racing vehicle for "Go-Go Karting", a race in Doherty in the San Fierro leg of Race Tounaments.

Retrieved from ‘https://www.grandtheftwiki.com/index.php?title=Kart&oldid=375617’
Categories:
Cookies help us deliver our services. By using our services, you agree to our use of cookies.