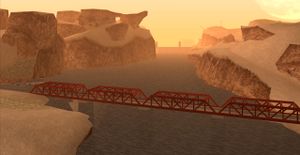 Sherman Reservoir in Bone County, San Andreas. In the distance is Sherman Dam.

Sherman Reservoir is the large body of water trapped by Sherman Dam in Bone County, San Andreas. It provides recreational opporunities, functional support to the dam's facilities, and acts as a physical barrier between Tierra Robada and Bone County. There are no outlets from this reservoir, and it sits at the highest elevation of any body of water in San Andreas. Sherman Reservoir is a re-creation of Lake Mead, the body of water on the Colorado River created by the Hoover Dam in Nevada, after which Sherman Dam is modeled.

Sherman Reservoir, which sits to the north of Sherman Dam, is often mislabeled as being located to its south, despite the fact that the narrow channel abutting the dam's southern side establishes a direct connection to the ocean via Easter Bay and San Fierro Bay, something a reservoir would not do.

Carl Johnson's arrival in Las Venturas is met with a very tantalizing opportunity. After meeting up with his friend, Wu Zi Mu, at his new headquarters in The Four Dragons Casino, Carl learns that Caligula's Palace, a casino just up The Strip, is being acquired by the Leone Family in a hostile take-over. Carl's new associate in Las Venturas, the bent lawyer Ken Rosenberg, provides him the opportunity to befriend Salvatore Leone and infiltrate the casino's operations. Part of the developing plan to rob the casino's vaults is to temporarily disrupt the city's power supply in order to provide the cover of darkness and confusion to the would-be thieves. In order to do this, Carl sets off to Sherman Dam, which provides hydroelectric power to the city of Las Venturas, in order to plant remotely detonated explosives on the dam's generators. He pilots a Nevada from Las Venturas Airport to the dam, parachutes onto the quay, and sneaks inside the dam's facilities unnoticed. After planting the explosives, Carl is trapped on top of one of the dam's control towers, and is forced to plummet into the dam's outlet channel (often mislabeled as Sherman Reservoir) to evade the pursuing authorities.

Retrieved from ‘https://www.grandtheftwiki.com/index.php?title=Sherman_Reservoir&oldid=364896’
Categories:
Cookies help us deliver our services. By using our services, you agree to our use of cookies.