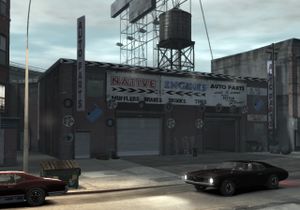 Native American Engines in GTA IV, one of the first spray shops players can use in the game.

In Grand Theft Auto IV and its episodic packs, spray shops are found scattered all over Liberty City, functioning as both a vehicle repair shop as well as a location to clear the player's wanted level. Unlike its primary predecessor, the Pay n' Spray, spray shops now have distinct names, but are still referred to as "Pay n' Sprays" by the game's tooltip during "Easy Fare", as well as on the pause-menu map.

There is a total of five spray shops in the city: One in Broker, two in Algonquin, and two in Alderney. Unlike preceding games, the spray shops are not accessible from the start of the game's storyline, as they will only be available for use after completing "Easy Fare"; until then the entrances to the spray shops are closed. 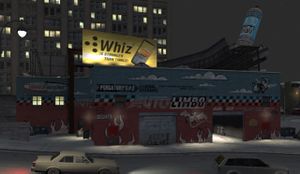 Auto Limbo is one of two spray shops in Algonquin located off the southern bend of West Way in the district of Purgatory, directly north from the northern end of an abandoned Algonquin elevated railway line.

Auto Limbo also bears an updated TransFender logo on the northeastern corner, although the game does not allow the player the customize cars as in GTA San Andreas. 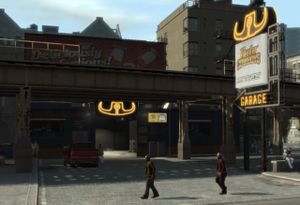 Auto Cowboys is the second spray shop in Algonquin, being located further north on the northern end of Frankfort Avenue in Northwood, directly in front of an elevated portion of the Algonquin Inner Line. Due to its location, the spray shop may not only be useful when one is in northern Algonquin, but also Bohan via the Northwood Heights Bridge (as Bohan has no spray shop; however, players who are under higher wanted levels will have to overcome roadblocks set up on both ends of the bridge). The spray shop is also notable for mentioning "Pay 'n' Spray" as a byline, although the spray shop's actual name does not allude to it. The Auto Cowboys building is otherwise unremarkable.

Axel's Pay 'n' Spray is a set of two spray shops based in Alderney: One at Panhandle Road and Catskill Avenue in Leftwood (underneath the northern end of the Plumbers Skyway), and the other at Hardtack Avenue and Roebuck Road in Port Tudor.