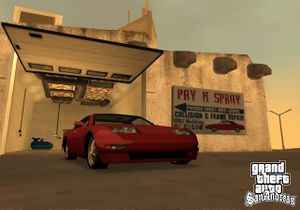 Pre-release screenshot of a Doherty, San Fierro Pay 'n' Spray in GTA San Andreas with a Euros parked in front.

A spray shop is a business which its main job is to repair and spray a vehicle into a different color. In the Grand Theft Auto series, spray shops can be used to evade the police, in addition to repairing and changing the vehicle's color and, in earlier GTA games, the license plate of the vehicle. Spray shops exist throughout the series but their main purpose by large remains the same.

Spray shops debuted in Grand Theft Auto 1 in the form of simple one-way or two-way drive-thru facilities of varying designs (which depend on the city they are in), scattered across all cities in the game. Spray shops in Liberty City are simply sheds with corrugated roofs marked with "AUTO" labels on the roof; San Andreas spray shops are designed as proper garages also labelled with "AUTO" on the roof; spray shops in Vice City, on the other hand, are specifically known as "Al's Paint Shop", and are embedded into actual buildings in the city. To use a spray shop, players must drive their vehicle into the shed (from either side) until a message via the pager appears notifying that the vehicle has been repaired, its license plate changed, the player has paid for the services in exchange.

The cost of a visit to a spray shop is relative to vehicle damage and/or wanted level. Standard vehicle repairs will often require only a few hundred to a few thousand dollars, but players with wanted levels often require around $10,000 in total; players who enter in an undamaged vehicle and with no wanted level will simply be recolored or be given a new set of license plates for $500. Players who do not carry sufficient money will naturally be turned away.

The paint shop has a wide range of colors available, but the player may not choose which color the vehicle is been re-sprayed. In certain cases, particularly with special vehicles, the color will not change, but the police will no longer recognize the vehicle as if it had. Also notable is the ability for spray shops in Liberty City or Vice City to recolor the player's vehicle with one of a few unique color or paintwork unavailable in normal traffic.

While the spray shop covers many civilian vehicles, including motorcycles, the spray shop does not accept emergency vehicles (as they are generally too "hot" to handle) or vehicles that are considered too large or heavy (i.e. Buses, Coaches or Tankers).

Spray shops in the GTA London expansion packs remain virtually unchanged, except the buildings are labeled as "Garages" and the cost per use is one tenth the amount in GTA 1.

"Max Paynt" (center) among a group of other garages in GTA 2.

Spray shops in Grand Theft Auto 2 take the form of "Max Paynt" garages integrated into garage complexes that also offer other vehicle-related upgrades. Much like in GTA 1 and GTA London, the spray shops are drive-thru facilities that can be entered from either side, and impose the same restrictions on vehicles. However, the cost of using its service is now set at $50,000 per use, significantly higher than in its predecessors.

The vast majority of spray shops between Grand Theft Auto III and GTA Vice City Stories take the form of Pay 'N' Spray garages with several noticeable changes in its fundamental mechanics. Other garages capable of repairing vehicles include Spray'n'go in GTA Vice City, and mod garages (TransFender, Loco Low Co., and Wheel Arch Angels) and Michelle's Auto Repair in GTA San Andreas. Both Spray'n'go and Michelle's Auto Repair function just like Pay 'N' Sprays, although the latter will be available for use for free later in the game (see below). 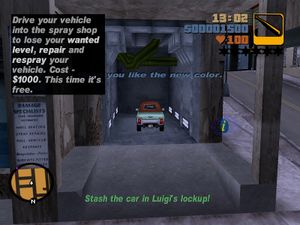 Beginning GTA III, the cost of using spray shops became far more affordable, originally costing $1,000 for each use (before being reduced to $100 from GTA Vice City onwards). When the spray shop is first introduced by the game, the cost of using one is usually free, as demonstrated here during "Don't Spank Ma Bitch Up" in GTA III.

Respray shops are no longer designed as drive-thru facilities, appearing more like actual respray body shops or garages accessible from only one side. To use a spray shop, players must enter it and stop their vehicle inside, triggering the garage door of the spray shop to close, repair any damage the player's vehicle has sustained and recolor the vehicle, and clear any wanted level, before the garage door reopens allowing the player to drive out. Vehicles at a mod garage are resprayed in a different manner, but the effects of resprays are the same as other spray shops; selected vehicles at Loco Low Co. or Wheel Arch Angels are also allowed to carry custom paintwork.

Spray shops further extend support for large commercial vehicles, but do not accept a vast majority of emergency vehicles still, saved a few special cases (i.e. the FBI Car in GTA III, the police variant Cheetah and FBI Washington in GTA Vice City, and the ladder variant of the Fire Truck in GTA San Andreas). In addition, bicycles, which are invulnerable to damage, are also unacceptable, as the player will be treated with an on-screen message "I don't do toys!"

Like its predecessors, the player's wanted level, if there is any, is immediately eliminated after using a spray shop in GTA III. From GTA Vice City onwards (except GTA Advance, which follows GTA III's system), visiting a spray shop after incurring a wanted level results in a probationary time period (where wanted stars on the HUD flash) that lasts 20 seconds before the player is completely cleared of police attention; if any crimes are committed regardless of whether or not they were in view of a police officer, the full wanted level will be immediately reinstated.

The cost of each respray is initially set at $1,000 per use in GTA III; from GTA Vice City onwards, however, the price is lowered to only $100 per use. Unlike its predecessors, the player can in fact use a spray shop free of charge provided the vehicle they are in is undamaged or only lightly damaged and the player has no wanted level; the only effect is a change of color for the vehicle, if available, accompanied by any one of two messages: "Respray is complimentary" or "Hope you like the new color". Vehicles with only blown tires (In GTA Vice City or later) can also use spray shops for free; players with vehicles that have damage solely by gunfire or only a broken front windscreen however will still be charged. When the player is taught how to use spray shops in introductory missions, the visit would typically be free of cost.

As mentioned, players are also be normally charged $100 for each visit to Michelle's Auto Repair until they begin to date Michelle Cannes, to which point it will be free. Pay 'n' Sprays visits in GTA Vice City Stories will also be free of charge once the player completes "Civil Asset Forfeiture Impound".

Pay 'n' Spray as an extensive chain no longer exists, having been replaced by those with varying business names, although the "Pay 'n' Spray" name persists as part of a new name for two spray shops and a by-line for another. Despite these changes, both games still refer to any of their spray shops as "Pay 'n' Spray" in tooltips and briefs.

For both games, the player can only enter a spray shop when they are out of sight of the police. In addition, each visit to a spray shop advances time by three hours (as opposed to near instant respray and subsequent repair of a vehicle in their predecessors). Each spray shop visit in GTA IV costs $100 while GTA Chinatown Wars' spray shops charge $200; otherwise, visitations are free if the player's vehicle is undamaged.

In GTA IV multiplayer modes, spray shops can be used for free all the time and does not subtract money from the player's online character. Another minor quirk in GTA IV is that a resprayed color is determined by the player's "favorite car color" as shown in the game stats.

(To show your cordinates you have to enter a cheat code, use at your own risk)

Retrieved from ‘https://www.grandtheftwiki.com/index.php?title=Spray_Shop&oldid=413898’
Categories:
Cookies help us deliver our services. By using our services, you agree to our use of cookies.