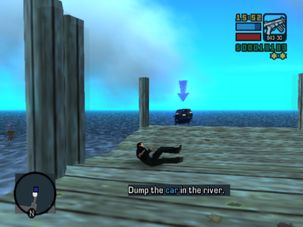 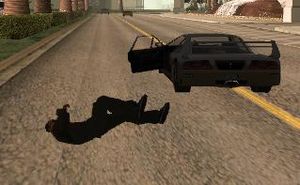 Carl Johnson bailing out of a Turismo in Grand Theft Auto: San Andreas.

A bail out refers to an act of jumping from a moving vehicle. This ability was first made available in Grand Theft Auto: Vice City, and has been available in most Grand Theft Auto games since. Until GTA Vice City, the player could only exit vehicles once they were traveling at low speed or had come to a complete stop (with the exception of ships).

Bail-outs are often used as a quick means of escaping from a vehicle which is either in danger of exploding, entering dangerous territory, or about to fall off a cliff or into water. Bailing out can also be strategically useful, allowing one to send a vehicle speeding into a group of enemies while leaving oneself free to attack independently. Bail-outs are executed with the same key or button that the player uses to enter or exit vehicles, while the vehicle is still in motion. In most cases, the player will lose a small amount of health or Body Armor as a result of hitting the ground after exiting the vehicle; in fact, sometimes, the player character can be heard making a pain grunt. Thus, it is possible to be wasted from bailing out. Grand Theft Auto: San Andreas is an exception — the player will not lose health when bailing out unless they are bailing out of a land vehicle which is in mid-air (and which is relatively high above the ground).

In Grand Theft Auto IV and Grand Theft Auto V, the use of ragdoll physics makes it hard to predict the amount of damage the player will sustain, as the player will now maintain inertia from the vehicle and continue to move forward, bouncing along the ground and losing health with each bounce; the damage sustained is generally greater than that suffered in previous GTA games, to the point of being potentially lethal to players lacking in health, and objects like walls, other cars, solid items on the street (such as lampposts) factor in to the possible damage the player will sustain. As inertia will still move the player forward after bailing out, and bail-outs are executed at least one second after the player presses the button, players must take care to bail out well before a vehicle is due to explode or fall. Since the player remains at about the same speed as the vehicle they will often stay alongside it for a short while. This can be a huge danger if the vehicle explodes.

Bail-outs can be done from aircraft as well as land vehicles. As falls from high altitudes are lethal (unless the player lands in a body of water that is deep enough for the player to not take damage), players who completed the Flying School in GTA San Andreas are equipped with parachutes after exiting any aircraft to provide a chance of survival after ejecting.