The Mafia Sentinel is evidently a four-door sedan based on the games' renditions of the Sentinel, resembling a real-life mid-1990s BMW E36 3 Series, but this car was closely resembling a 1990-1995 BMW M5, which is a high performance version of the 5 Series; the Mafia Sentinel is also related to the sporty Sentinel XS variants in later games. It is essentially a tuned version of the Sentinel, with a bodykit, tinted windows, and blinds over the rear window. Its paintjob is always dark gray in GTA III and black in GTA Liberty City Stories, and cannot be resprayed into any other color in a Pay 'n' Spray. In the strategy guide for GTA Liberty City Stories, pictures of a white Leone Sentinel can be seen. Like any gang car, attempts to steal one with a Leone Family member inside will result in surrounding peers attacking the player.

The Mafia Sentinel's handling is slightly sharpened, whilst average speed is noticeably quicker over its stock counterpart. Its performance coupled with its four occupant capacity makes this an ideal car for bank jobs, attacks on rival gangs, and street racing. 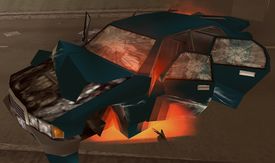 A wreck of a Mafia Sentinel in GTA III's introduction.

Retrieved from ‘https://www.grandtheftwiki.com/index.php?title=Mafia_Sentinel&oldid=413204’
Categories:
Cookies help us deliver our services. By using our services, you agree to our use of cookies.