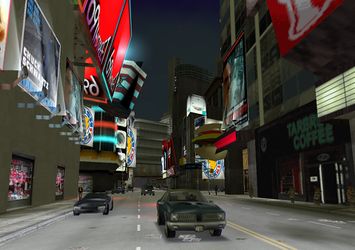 Bedford Point is a commercial core in Staunton, housing much of the city's massive skyscrapers, museums and galleries, which are primarily concentrated towards the north, east and south. In comparison to depictions of neighboring Torrington as a place of "big business" and formality, Bedford Point's occupants are seemingly more culturally-inclined and less formal in appearance.

The district has no gang activity, although some businesses pay protection to the Yakuza as noted in "Shima" in GTA III.

The center of the district is the city's equivalent of New York City's Times Square. Here, the player can see many signs that advertise businesses and other stuff like Punk Noodles, 69th Street, Funcola, Top Down City, Flashback FM, Doghouse, Gasoline, Half-Cocked, and Liberty Soul FM. A functional digital clock and temperature gauge, as well as another analogue clock, are also featured in the GTA III rendition of the area.

Bedford Point contains a church on the west side with two cone shaped towers; this is most likely home to a Liberty City convent. In 1998, during GTA Liberty City Stories' timeline, there was a graveyard near the church, complete with the people who died, notably the storyline characters. By GTA III's timeline in 2001, it is replaced by an opera house leaving the church little more than a narrow strip of land for use as a cemetery.

The district also houses the second tallest skyscraper (after another in Torrington) in the city, which happens to be the tallest in GTA Liberty City Stories as the aforementioned Torrington skyscraper is only half its height.

In addition, Bedford Point contains an underground subway station for the Liberty City mass transit system at the southeastern corner of the district. The subway will take players to Chinatown, Francis International Airport and Liberty Campus' upper subway station.

Retrieved from ‘https://www.grandtheftwiki.com/index.php?title=Bedford_Point&oldid=361783’
Category:
Cookies help us deliver our services. By using our services, you agree to our use of cookies.