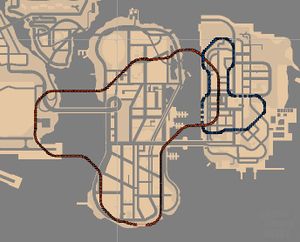 A map of Liberty City in Grand Theft Auto III, showing the paths of the Portland El (L-shaped loop in Portland) and the underground subway line (T-shaped loop extending across all three islands).

The elevated and subway rail systems of Liberty City as depicted in Grand Theft Auto III encompasses two ring lines, one elevated and one underground, which serves various portions of the city. Because the GTA III rendition of the city is reused in Grand Theft Auto: Liberty City Stories, the railway systems remain virtually unchanged in the game, saved a few minor tweaks.

Due to hardware constraints, the rail networks are absent in the Grand Theft Auto Advance rendition of the city.

The network composes of two rail lines, one completely elevated and confined within Portland, and one completely underground and connected to all three islands, or boroughs, of Liberty City. The Portland El and the subway are two separate, independent systems; as a result, there is no physical or official connection between the two services.

The systems themselves are simply lines with two train tracks, but trains only travel counterclockwise along the inner lane with two out of three stations having only one platform for the functional side of the tracks. This may suggest that there was originally two trains running in opposite directions, or may just have been put in for possible use by the player only.

The systems' trains, known simply as Trains, resemble those of the New York City Subway R68. 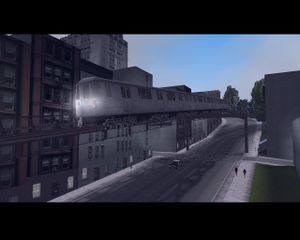 When on a moving train, the game will play cinematic sequences of the train moving along the line. Pictured here is a Portland El train in GTA III.

The Portland El was completed in 1930, and continued to run until at least 2001 (when Grand Theft Auto III took place). Much of the system, obviously, run on elevated tracks, although a very short stretch of the line at Saint Mark's does level itself to a near at-grade configuration against the district's slope.

While non functional, a segment of the Portland El's tracks at Saint Mark's is briefly featured in Grand Theft Auto: San Andreas, during "Saint Mark's Bistro".

The Portland El has stations in Saint Mark's, Hepburn Heights, and on the edge of Chinatown. Initially unnamed in GTA III, the stations are retroactively named in GTA Liberty City Stories after Rockstar North developers who worked on GTA III, as listed below. The three districts served by the Portland El network, in Grand Theft Auto III, belong to the Leone Family, the Diablos and the Triads. This is likely by design, and after leaving Portland in Grand Theft Auto III it becomes extremely dangerous to use the Portland El, as each gang is out to kill the player character. 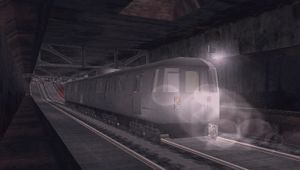 The Liberty City Subway is a fully underground rail line dispersed throughout all three of Liberty City's boroughs, serving as an interborough link. It provides convenient access to Francis International Airport with a subway station at the complex.

Stations along the subway line share close to the same entrance, concourse and platform designs, although there are a few distinctions due to the system using only one track for operational trains. Much like the Portland El, the stations along the line are not named in GTA III, but are in GTA Liberty City Stories. All in all, there are four stations; one in Portland, two in Staunton Island, and one in Shoreside Vale:

In GTA Liberty City Stories, it is revealed in "Bringing the House Down" that a disused portion of subway exists underneath Rockford and Fort Staunton in Staunton Island. The system, cut off from the rest of the active subway system, consists of two lines, three antiqued subway stations one being an escape station and two old subway train wrecks (one at the first station and the other at the last station).

During "Bringing the House Down", the player is required to drive their explosive-loaded van to the abandoned tracks via a hole from the unfinished Staunton stretch of the Porter Tunnel, and plant multiple bombs in the tunnel system directly underneath Fort Staunton to destroy the entire district. The player escapes the explosion through Fort Staunton's subway exit, which is locked outside the mission.

Retrieved from ‘https://www.grandtheftwiki.com/index.php?title=Subway_in_GTA_III&oldid=369067’
Categories:
Cookies help us deliver our services. By using our services, you agree to our use of cookies.