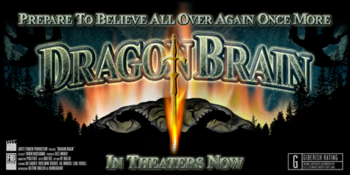 Dragon Brain is a fantasy film that is advertised on the radio in Grand Theft Auto IV with the tag "Dragon Brain coming to theaters, rated G for Gibberish.". It is likely to be a parody of popular fantasy film series' such as the Harry Potter film series and The Lord of the Rings film trilogy. The name could also be a parody of Dragonheart. The film's website is www.dragonbrainthemovie.com. The film feature multiple action/fantasy cliches, including a "hero with a California accent" and a furry sidekick who says oneliners during battle scenes.

Woman: It’s a time before time. Oh no, here come the fucking dragons!

Man: We need a hero, or evil will reign for 2,000 generations, and a million orcs will storm these lands, and the CGI bill will be apocalyptic!

Hero: I’m only a humble blacksmith with a California accent. How can I possibly rise up and conquer evil without a montage?

Guy: How indeed? Do we believe?

Hero: I believe, in the miracle of merchandising! I’ll need a furry talking sidekick to spew one-liners while I chop off heads!

Guy: We shall spill goo out of this drill.

Narrator: Prepare to sit, through a four hour journey.

Hero: I’ve got a quest: I must defeat evil and sell franchising rights to theme parks.

Woman: We’re cursed! The dragons! They're flying upside down!

Narrator: The quest is yours: Dragon Brain, coming soon to a theater near you. Rated "G" for gibberish.

Retrieved from ‘https://www.grandtheftwiki.com/index.php?title=Dragon_Brain&oldid=385177’
Category:
Cookies help us deliver our services. By using our services, you agree to our use of cookies.