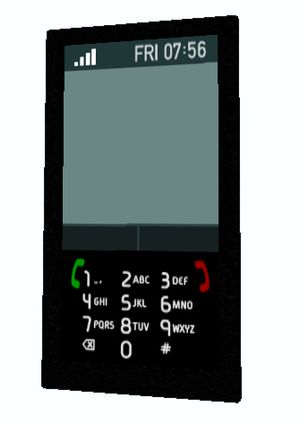 Badger phone in GTA IV, without the Badger logo.

The mobile phone, also known as the cellphone and cell phone, is a recurring portable communication device that has been carried by protagonists in various Grand Theft Auto games. Prior to Grand Theft Auto IV, the phone was essentially cosmetic, and could not be used by the player to make calls at will; the functionality of mobile phones is greatly expanded in the HD Universe.

In Grand Theft Auto 1, mobile phones technically function identically to pagers, delivering messages (often one-way) to the player at the bottom of the screen, representing verbal communication instead of the pager's text messages. Much like the pager, messages delivered via a mobile phone are displayed in text form beside the graphical representation of the phone.

The mobile phone is also present in the Grand Theft Auto: London mission packs and functions identically to GTA 1's mobile phone, but is refashioned into a walkie-talkie as modern mobile phones were not available in the 1960s.

Since GTA Vice City, players can choose to answer a ringing mobile phone; failing to answer a call will usually lead to the phone repeatedly ringing between a period of silence until the player answers it, or after the effects of not answering the phone is activated (i.e. A drop in the player's relationship with a girlfriend). During a verbal exchange on the phone, the player's mobility is reduced while the player holds the phone, being incapable of jumping, sprinting, or holding and shooting a weapon until the call ends. Players may also have the option to skip an in-between-mission phonecall.

In GTA Vice City, Tommy Vercetti retrieves a phone from Leo Teal during "Back Alley Brawl", allowing him to receive calls from in-game characters about missions or other topics. The phone's design is based on early commercial mobile phones from the 1980s.

In Grand Theft Auto: San Andreas, Carl Johnson has a phone which he uses to make and receive calls. Again, these may be about missions, they may relate to the general story, they may be tips from other characters, or they may serve no particular purpose — for example, the prank calls CJ receives from Catalina. The phone's design is that of an early flip-phone, with a small LCD display for numbers.

In Grand Theft Auto: Liberty City Stories, Toni Cipriani retrieves a phone from a deceased Sindacco member in "Snuff". This phone is presumably the phone he uses from then on, as Toni originally called using a pay phone in "Home Sweet Home". The phone's function is similar to those in GTA Vice City and GTA San Andreas, but is depicted as a late-1990s clamshell phone.

The use of the phone is greatly expanded in Grand Theft Auto IV, The Lost and Damned and The Ballad of Gay Tony, featuring a multitude of features, including the ability to:

In GTA IV, the player starts out with a basic "Badger" phone (given to Niko Bellic by his cousin Roman during the second mission) which features a monochrome display as well as limited functionalities (listed above). During "Photo Shoot", the player character is given an upgraded replacement, a "Whiz" phone equipped with:

Themes and advanced ringtones of the phone can be purchased via a website on the in-game internet. Access to vipluxuryringtones.com is initially unavailable in GTA IV until the second model of the phone is acquired.

In The Lost and Damned and The Ballad of Gay Tony, the player's phones are practically identical to Niko's second phone but with cosmetic changes. Johnny and Luis each have a unique theme for their phones; as Johnny's phone assumes a more hardy appearance with a black plastic/leather phonecase and has a unique "Lost MC" theme featuring The Lost Motorcycle Club's patch, while Luis Fernando Lopez' phone appears to be more high-end than Niko and Johnny's phones and is round, similar to Johnny's, and has a glowing blue keypad and a unique "Club" theme.

As an exclusive feature in The Ballad of Gay Tony, the player can replay any of his accomplished missions via his phone in order to be able to get a better score on them.

If the player has damaged a vehicle to the point where the engine won't start, the phone can be used to "jumpstart" it by calling any number or contact — the engine will spontaneously function again, although no damage will be repaired. For convenience's sake, one can cancel the phone call as soon as "Calling..." is seen on the phone's display — the engine comes back to life as soon as the call is initiated.

In the console versions of the game, the phone can also be used as a kind of "super handbrake", to instantly stop any vehicle, no matter the speed. Initiating the camera while driving will instantly stop the car — the player can leave the phone open to the "Camera" menu option, and then press X (on PS3) or A (on Xbox 360) when they want to stop. This is presumably a bug, and was fixed in the PC version — activating the phone camera while driving on PC will merely change the game camera to the "hood cam" perspective, and activate the phone camera as normal. As this exploit requires a camera function, it can only be performed once the player has acquired the second model of phone.

In the PC version, the Video Editor is an option in the phone which will prompt the player to leave gameplay when selected with all unsaved progress lost.

The mobile phone concept is preserved in Grand Theft Auto V, but it will be used in a bit different way. The player won't be getting as many phone calls from friends as it was in GTA IV, since many features are moved onto the map in order to make it easier for players to find their way to some activities. The phone does, however also have some new functions, such as accessing the Internet and receiving in-game e-mails. The player can now save their progress at any time off-mission using the "Quick Save" option.

The camera is linked to the Snapmatic app. Snapmatic can be used to save in-game screenshots to the player's Social Club account, and the player can also share in-game images with friends on Facebook and Twitter.

Retrieved from ‘https://www.grandtheftwiki.com/index.php?title=Mobile_Phone&oldid=417142’
Categories:
Cookies help us deliver our services. By using our services, you agree to our use of cookies.