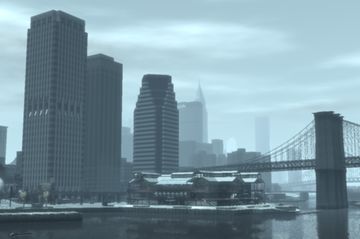 Fishmarket South as viewed to the northwest from the Humboldt River. The low-rise building at the riverfront is Pier 45.

Fishmarket South is a 4-block neighborhood in Algonquin, Liberty City. It is bounded by Fishmarket North to the north (by Emerald Street), Lower Easton to the northwest (by Emerald Street), Chinatown to the west (by Albany Avenue), The Exchange to the southwest (by Albany Avenue, Barium Street and Union Drive East), Castle Gardens to the south (by the Bus Lane near Higgins Helitours), and the Humboldt River to the east.

The result of its design is a mix of industrial and commercial structures, with Fishmarket South's three prominent skyscrapers concentrated inland towards the west between Borlock Road and Privateer Road, and Pier 45 and industrial buildings towards the riverside in the east. Both areas are divided by Union Drive East, which elevated half to the north (running over Privateer Road) descends into the at-grade half toward the south in the district.

Fishmarket South posesses a noteworthy selection of businesses and landmarks. These include: The Higgins Helitours helipad, a bus terminal, Pier 45, the Broker Bridge pedestrian access, and a FDLC fire station.

The area offers spectacular views of the Broker Bridge as it climbs up from its source in neighbouring Chinatown and crosses over above the Humboldt River from Fishmarket South. Located directly underneath the bridge is the Liberty City waste management depot. This is where Liberty City's fleet of Trashmaster dust-carts are stored when not on trash collection duties.

A skate park is also situated underneath the rising span of the Broker Bridge between Borlock Road and Privateer Road.

The presence of Pier 45 and skyscrapers, as well as their position close to the Broker Bridge implies the district is an amalgamation of the historical South Street Seaport and the southeastern waterfront of the Financial District in Manhattan, New York City. Pier 45 and the district's the three skyscrapers are evidently based on real-life counterparts in their respectable locales, albeit scaled down to an extent.

Fishmarket South is also linked to the Broker Bridge via a stairway from the waterfront in the northern edge of Fishmarket South off Privateer Road. The stairs leads the bridge's pedestrian walkway, which eventually ends at a stairway to Hove Beach, Broker.

The aforementioned Higgins Helitours helipad is also situated at the southern border with Castle Gardens, allowing the player to take helicopter tours around the city.

Retrieved from ‘https://www.grandtheftwiki.com/index.php?title=Fishmarket_South&oldid=356397’
Category:
Cookies help us deliver our services. By using our services, you agree to our use of cookies.