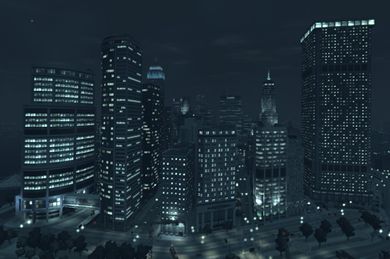 The Exchange at night, as viewed to the north from over neighboring Castle Gardens.

The Exchange is a neighborhood in southern Algonquin, Liberty City in Grand Theft Auto IV and Grand Theft Auto: Chinatown Wars. It borders City Hall and Chinatown to the north by Calcium Street, Fishmarket South to the east by Albany Avenue, Barium Street and Union Drive East, Castle Gardens to the south by the South Parkway and Castle Garden City to the west by Union Drive West.

The Exchange occupies nearly all built-up areas of lower Algonquin, and serves as Liberty City's historical downtown area. The area is characterized by multiple narrow streets lined with towering skyscrapers, most likely office buildings, a handful of cobblestone roads visible in portions of the city, and few green spaces. In comparison to midtown Algonquin, the Exchange's commercial occupants are presumed to lean towards more conservative corporate organizations and big business, and as a result the district is commonly depicted with pedestrians donning suits and other formal attires.

Like much of Algonquin south of Topaz Street, Exchange is intended to lay host to a number of high-class organizations and retail outlets. In gameplay, however, the area boasts only one of two Perseus clothing stores in the city, as well as housing the offices of Goldberg, Ligner & Shyster. A non-interactive Al Dente's restaurant is also based in The Exchange.

The Exchange is evidently the in-game equivalent of Manhattan's Financial District in New York City. In comparison to other districts in Algonquin, however, the Exchange's design in detail is less adherent to that of its real-life counterpart. While developers of the game have taken artistic liberties when designing and creating some of the district's buildings, elements of buildings from Manhattan's Financial District may still be visible if inspected in detail.

The Liberty City Subway has a station, Castle Gardens, along the neighborhood's southern border. The stop is served at all times by the Algonquin Outer Line.

Retrieved from ‘https://www.grandtheftwiki.com/index.php?title=The_Exchange&oldid=367003’
Category:
Cookies help us deliver our services. By using our services, you agree to our use of cookies.