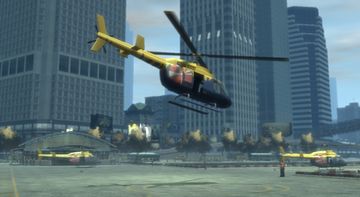 A Helitours Maverick taking off at the Higgins Helitours helipad.

Higgins Helitours gives helitours using the company's own Mavericks at a price of $150 for each ride. A Higgins advertisement on TV boasts the advantages of helitours over bus tours, claiming a fun and safe adventure in the sky (while footage shows various helicopters crashing at land and sea; fortunately, there is no such danger when the player takes a tour).

The company bases its operations at a landing platform situated off the shores of Castle Gardens and Fishmarket South, Algonquin. The layout of the landing platform as well as its location hint that the helipad may be based on the Downtown Manhattan Heliport in New York City, although the terminal building is completely different.

The name Higgins is apparently a reference to a character in the TV show Magnum P.I., and the tour company was originally to be named "Magnum Helitours"[1]. The company uses the slogan "We'll never go down on you", a reference to oral sex.

A Higgins Helitours leaflet, as seen on the Rockstar Games Social Club website.

Flying all tours at least once will earn the player the Sightseer achievement/trophy. The different tours are obtainable by boarding each of the helicopters in turn. Not all helicopters will be there at the same time; usually two or three at a time are available.

Retrieved from ‘https://www.grandtheftwiki.com/index.php?title=Higgins_Helitours&oldid=410938’
Categories:
Cookies help us deliver our services. By using our services, you agree to our use of cookies.