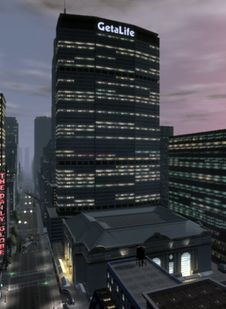 The GetaLife Building in GTA IV, as viewed to the northeast.

It's a landmark but that's about it. Big fucking deal. Another big building. Why don't you go add it to your album of terrorist targets.
- Peepthatshit.com

The GetaLife Building is a skyscraper in the GTA IV rendition of Liberty City, located in Easton, on the borough of Algonquin, between Jade Street and Iron Street, on Columbus Ave. right in front of the Grand Easton Terminal. The building was constructed in 1962, and stands at a height of 808 feet.