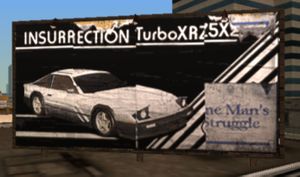 A worn advertising of the Insurrection on a Little Havana billboard in GTA Vice City Stories. Note the lack of spacing or dashes on the "Turbo XRZ5 X-2" portion of the name.

Much like Maibatsu vehicles advertised in earlier games between GTA III and GTA Liberty City Stories, the Insurrection is not seen on the road, but is distinctive in that it is clearly featured on advertising; specifically, a billboard in Little Havana. Advertised as a powerful sports car, the radio ad is meant to appeal to men in midlife crisis. The car is stated to feature then state of the art accessories that have very little use performance-wise, and its full name parodies of the trend of using letters and numbers to denote car models.

The V-8 engine and T-top feature suggest that its real life equivalent is the third-generation Pontiac Firebird. Indeed, the shape and form of the car as depicted on its billboard advertising is equivalent to a car of this variety, and even features pop-up lights, however the front bears more of a likeness to the first-generation Mazda RX-7, namely a 1983 Series 2 version.

The car's appearance marks the first time the Imponte name is used as a car brand in the GTA series.

Leisure. Rebellion. Insubordination.
Shift into the awesome reality with the Imponte Insurrection Turbo XRZ5 X-2.
For men more interested in 0-to-60 than 9-to-5.

Feel the pulse of the streets in this ultra turbo coupe.
It's a world-class turbocharged touring car,
where you're surrounded by the very latest in high-tech technological wizardry.

Like an overhead digital clock, remote control mirrors,
and electronic ashing device for your cigarette.

Plus, a genuine pleather-wrapped steering wheel,
so you know what you're gripping.

Visit the new definition of freedom and luxury with the
Imponte Insurrection Turbo XRZ5 X-2.

Take out the T-tops, put them in the trunk, step on the gas,
and hear the throaty roar of the V-8 screaming under the hood.

Yeah. Give it to her. She wants it.

The Imponte Insurrection Turbo XRZ5 X-2.
Isn't it time you outperformed the competition, and came first?

Retrieved from ‘https://www.grandtheftwiki.com/index.php?title=Insurrection&oldid=308833’
Categories:
Cookies help us deliver our services. By using our services, you agree to our use of cookies.