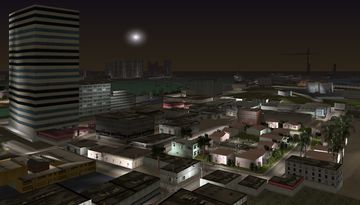 Little Havana in GTA Vice City, as viewed to the southeast at night.

Located in central Vice City Mainland, it neighbors Viceport and Escobar International (and Fort Baxter) to the south and southwest, Little Haiti to the north, and Starfish Island to the east. 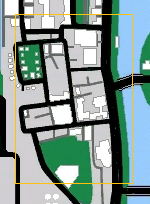 Little Havana is generally a low-rise, low density district implied by name to be an enclave for Cuban immigrants to Vice City, with larger buildings concentrated towards the northeast, and low density commercial and residential buildings huddled to the west. The Cuban flavor of the district is reflected by the presence of businesses with signage utilizing Spanish language, as well as the architectural aesthetics of the southern half of the district.

While more dense than neighboring Little Haiti, the district still contains swatches of greenspace in the suburban block to the northwest and around Sunshine Autos to the south. In GTA Vice City Stories, set two years earlier in 1984, the latter is redesigned, relocating Sunshine Autos slightly northwards while a trailer park (the base of operation for the Trailer Park Mafia) is added in parts of the field. Like Little Haiti, Little Havana's eastern shoreline is lined with disused docks.

In GTA Vice City Stories, connectivity between Little Havana and Escobar International is substantially improved with a road between the old Sunshine Autos and the road to Terminal A added to cut traveling time between much of Vice City Mainland and the airport. In addition, a wooden bridge is also placed between the road to Fort Baxter and Little Havana's old docks, in front of The Big Package Storage Co..

In both games, the district houses both a Vice City Police Department station as well as a hospital, West Haven Community Healthcare Center, which both serve as respawn points for players who die or are arrested within the southern half of Vice City Mainland.

In GTA Vice City, three purchasable assets in GTA Vice City are based in Little Havana, including the Print Works to the north at the border with Little Haiti, the Cherry Popper Ice Cream Factory in the east, and Sunshine Autos in the south. Café Robina will also serve as the contact point for Umberto Robina's mission string, while a robbery at Little Havana's El Banco Corrupto Grande is central to "The Job". Clothing pickups can be found at the local laundromat and Little Havana Streetwear & Tattoo Parlour; in addition, Screw This is also based in the area.

In GTA Vice City Stories, the player receives missions from Marty Jay Williams and Umberto Robina in at the trailer park near Sunshine Autos and Umberto's residence just north from Cafe Robina, respectively. Four Empire Building sites are also based in Little Havana, while Stonewall J's, a gun shop, and the old Sunshine Autos are additionally present in the district.

In GTA Vice City circa 1986, Little Havana is the Cuban gang's territory. Over the course of the storyline, the district is embroiled in a gang war that sees the Cubans defending their area from the Little Haiti-based Haitian gang, vie for total control of the run-down area. Tommy Vercetti, head of the Vercetti Gang, was recruited by the Cuban head Umberto Robina to help in their turf war, but would later be working for the Haitians against his will. He later proved to be a tremendous ally by helping the Cubans destroy the Haitians' drug factory in Little Haiti, thereby crippling the Haitian's ability to continue pushing into Little Havana.

Retrieved from ‘https://www.grandtheftwiki.com/index.php?title=Little_Havana&oldid=413237’
Category:
Cookies help us deliver our services. By using our services, you agree to our use of cookies.