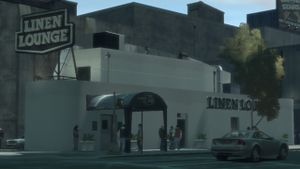 Exterior of the Linen Lounge in GTA IV.

Situated near the intersection of Ivy Drive North and Vauxite Street in North Holland, Algonquin, the Linen Lounge's customers seem to be predominantly African American, and is depicted to be owned by Triad leader Hsin Jaoming in GTA Chinatown Wars. It is a replica of the second Cotton Club in Harlem (666 West 125th Street); the name is also a parody of it.

In GTA IV, an SMG spawns on the roof of the club, accessible by stairs in an alley on the north side of the building.

Retrieved from ‘https://www.grandtheftwiki.com/index.php?title=Linen_Lounge&oldid=402626’
Categories:
Cookies help us deliver our services. By using our services, you agree to our use of cookies.