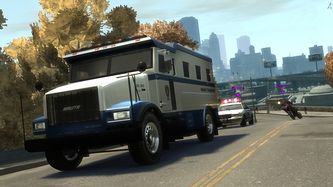 A Police Stockade in Mafiya Work.

Mafiya Work is a multiplayer game in Grand Theft Auto IV consisting of two to sixteen players. Working under the direction of Russian Mob boss Kenny Petrovic via Cell Phone, the player will compete against other players in a series of mini-missions.

The objective is to complete all missions asigned to you by Kenny Petrovic. He will call your cellphone, and give you any objective to complete, which could range from killing rival mob members, destroying various objects, machines, or vehicles, picking up and dropping off family members, and many other mini-missions. Once one objective has been completed by any player(s), the next one will immeadiately begin, so all missions happen in real time. Each mission grants money, so players win by having the most amount money from mission by the end of the time limit, by reaching the money limit first, or being the last remaining person in the game.

The Host can change a number of factors including

The money reward at the end of the match depends on the amount of missions completed by the players. Players - 2-8

Retrieved from ‘https://www.grandtheftwiki.com/index.php?title=Mafiya_Work&oldid=325867’
Categories:
Cookies help us deliver our services. By using our services, you agree to our use of cookies.