In Grand Theft Auto III, Grand Theft Auto: San Andreas, and Grand Theft Auto: Liberty City Stories, the Banshee resembles a 1992—1995 Dodge Viper RT/10, with its curvilinear design and dual single-exhaust ports, although the Banshee is narrower in width and has different headlight designs; the GTA San Andreas' rendition has its rollbar heightened to match the height of the A-pillar, giving the car a better targa top appearance. The Banshee's white racing stripe in GTA III cannot be recolored, while the same stripes on GTA San Andreas and GTA Liberty City Stories renditions may appear in various colors, including those that match the primary body color.

The GTA Advance rendition, which mimics the design of GTA III's Banshee, is also comparable to Grand Theft Auto 2's Rumbler, but is generally sleeker, sports the same single stripe as other Banshees, and comes with a covered top.

In Grand Theft Auto IV and Grand Theft Auto V, the Bravado Banshee resembles a 1996-2002 Dodge Viper Coupe, but has side exhausts and a shorter roofline resembling a third or fourth generation Dodge Viper. The front fascia loosely resembles that of several Marcos sports cars and the taillights resemble those of the Aston Martin DB9 and the 2001—2007 Aston Martin V12 Vanquish. Unlike the real-life Viper's V10 engine, the HD Universe Banshee has a 300ci (4.91 Liter) twin-turbocharged V8, according to the AutoEroticar website, and can be seen in-game if the player inflicts enough damage to cause the hood to come off.

Banshees in GTA IV and GTA V are present as convertibles with rollbars or hardtops, and may optionally feature more recessed hood vents. Similar to its real-life counterpart, the Banshee bears its own logo, resembling a screaming mouth with fangs (much like the real logo of the Dodge Viper) on the side panels, steering wheel, and upholstery. The standard Bravado logo is used on the front and rear of the car. The Banshee can be seen with an allover paintjob, or with a racing stripe down the middle. Inside, the typical cozy Dodge Viper interior is found with black leather-clad sport seats sporting the Bravado logo.

For whatever reason, the Banshee is not recognized as a sports car by GTA IV, as friends and dates that normally like or dislike sports cars in particular (as opposed to e.g. all expensive cars) will not have the same reaction to a Banshee; this does not appear to have any other effect on gameplay.

In the DS version of Grand Theft Auto: Chinatown Wars, the Banshee appears similar to either the Phoenix or its GTA Vice City rendition. In the PSP and iPhone/iPad Touch versions, however, the Banshee resembles its GTA IV rendition more.

Being a front-engine, rear-wheel drive, with a 10-cylinder engine, the Banshee between GTA III and GTA Vice City Stories is one of the speediest sports cars but suffers from poor cornering due to its rear wheel drive, making it prone to fishtailing and spinouts in sharp turns (including handbrake turns). Examination of game data for GTA III to GTA San Andreas reveal the vehicle's performance stats remain unchanged, with a top speed of 124 mph (200 km/h), a weight of 3,087 lbs (1,400 kg), a 5-speed transmission, an acceleration of 10.7 ft/s (3.3 m/s), and all-wheel brakes; these stats could be shared with the Banshee in GTA Liberty City Stories and GTA Vice City Stories. The Banshee's speed in GTA Advance is significantly high, nearly matching that of the police car, but has a marginally low crusher value of $448.

Upon closer inspection of the GTA III rendition of the Banshee's engine, a V12 engine can actually be seen instead of a 10-cylinder.

These traits remained unchanged until GTA IV, when its performance received significant tweaks.

The Banshee in GTA IV is powered by a 300ci (4.9 L) twin-turbocharged V8 mated with a 5-speed gearbox along with a RWD configuration. The GTA IV Banshee is the third fastest-accelerating sports car and one of the fastest overall with a top speed of 206 mph (331 km/h).

Handling is superb, with a slight hint of oversteer thanks to its low weight that complements the very torque-y engine. The suspension is firm and low, often leaving the Banshee smashing its body panels into low-laying objects, like curbs, and usually causes the Banshee to hop about on uneven streets at higher speeds. Braking is very good; the Banshee outbrakes every other vehicle in the game, and ABS is standard on all models. Crash deformation is acceptable. However, due to its front-mounted engine, it is much less resistant to frontal damage than rear and/or mid-engined sports cars such as the Comet and Infernus.

Overall, the Banshee is one of the more fun vehicles to drive, and well suited towards high-speed applications such as online multiplayer racing.

The GTA V rendition of the Banshee performs virtually identical to the GTA IV rendition, although the Turismo R now outbrakes the Banshee. Also, the Banshee's top speed without special abilities or upgrades is seemingly low for some reason, capping at 140 mph (225 km/h). According to legendarymotorsport.net, the Banshee now has an 8.4 L 400 hp engine (may still be a V8 like in GTA IV). 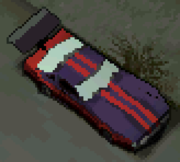 Chan Jaoming is depicted in GTA Chinatown Wars to own a modified Banshee, which features a purple body with red stripes, a spoiler, and light purple underglows at night, similar to the modified Comet. The car is obtainable in two missions: The first is in Jackin' Chan, when the car is caught in an inferno following a failed attempt by the Irish gang to kidnap Chan, and the car must be used to transport Chan to safety; the player must fail the mission to obtain the car. The second is during Clear the Pier, when Chan uses the car as a getaway vehicle. The player can pin the car to a wall and carjack it outright, allowing them to complete the mission while the car is in their possession.

The Banshee in GTA San Andreas can be modified at a TransFender, but is only offered a bare minimum of modification options:

The Banshee requested by Stevie in GTA IV.

Retrieved from ‘https://www.grandtheftwiki.com/index.php?title=Banshee&oldid=415750’
Categories:
Cookies help us deliver our services. By using our services, you agree to our use of cookies.