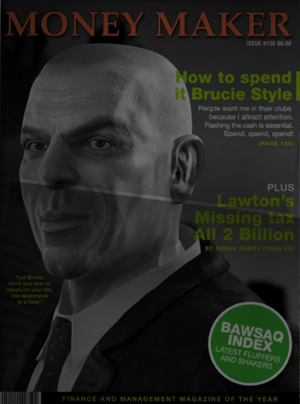 The magazine's front cover, from the Social Club.

Money Maker is a magazine in Grand Theft Auto IV. The magazine is about, as its name says, making money and people who are rich. Bruce Kibbutz starred on the front page of the magazine once in 2008.

The magazine can be found under a pile of $69 bills on the Millionaires Club page in the Rockstar Games Social Club GTA IV section.

Retrieved from ‘https://www.grandtheftwiki.com/index.php?title=Money_Maker&oldid=335220’
Categories:
Cookies help us deliver our services. By using our services, you agree to our use of cookies.