Bruce "Brucie" Kibbutz is a character in the HD Universe appearing in Grand Theft Auto IV, The Ballad of Gay Tony and Grand Theft Auto Online. He is a young, rich luxury automotive entrepeneur, a 31-year old fitness enthusiast and lifestyle coach (very much in the vein of English entrepreneur Scott Alexander, "the most vain man in Britain"). According to his website, he legally changed his middle name to Motivation.

Timothy Adams, who, himself, is somewhat of a fitness enthusiast, provides the voice of Brucie.

Childhood and other insecurities

Brucie Kibbutz was born in 1977. Brucie occasionally mentions to Niko that he was once a "fat loser" whom no one liked and no girl would kiss, which made him want to change his ways. In the mission, No. 1, he claims if he were gay, Roman would be in big trouble, but then admits he is only joking about being attracted to Roman. He also makes a definite point of saying to Niko "Brucie likes pussy... remember that, alright?"

Brucie indulges in what he calls "juicing" - injecting testosterone allegedly taken from Chilean bull sharks. It has led to excessive 'roid rage, and may account for Brucie's overactive excitement in most situations. He is a steroid user and possible dealer of performance enhancing drugs, something that has resulted in a few encounters with law enforcement.

In The Ballad of Gay Tony, Brucie's older brother Mori Kibbutz is introduced. Mori ridicules Brucie to no end, even now that they are both adults. During his appearances in Mori's missions, Brucie's arrogant, self-absorbed and egotistic lifestyle is revealed to be the result of living in his older brother's (figurative) shadow, Mori constantly putting him down and becoming overly competitive. More than once, this results in Brucie quietly sobbing to himself. His bisexuality is also more outwardly hinted at, in the mission Ladies Half Price when he tries to kiss Luis, even though he very quickly covers his tracks, claiming that he was just checking to see Luis wasn't going to come on to him. He denies his bisexuality in a e-mail he sends to Niko if the player wins a race in the original GTA IV.

Brucie is a successful entrepreneur who runs Brucie's Executive Lifestyle Autos, a garage situated in East Hook, Broker. He makes a point of flaunting his money and has even started his own website called Brucie's Executive Lifestyle, the actual purpose of which is unknown, but which seems to be a combined blog/lifestyle guide. Brucie is a V.I.P. at Maisonette 9, and has his name laminated on the guest list (It is implied Roman does as well). His favorite place to eat is at the Superstar Cafe.

Being in the business of cars (importing and exporting, customization and more) provides him many luxury and sports cars for his own use. Two of his own vehicles, a Banshee and Huntley Sport, have a black and gold color scheme. In addition, he owns a Squalo powerboat and a Maverick helicopter, both for purposes of entertaining women and friends. He is a womanizer, and is openly disrespectful towards women; it is implied that they are only drawn to Brucie because of his vast fortune, which he uses to take them on powerboat and helicopter rides throughout Liberty City.

When Brucie has his shirt off, a Chinese tattoo that reads "我" is visible. This translates to "me", or "I" in English, depending on what context it is being used in Chinese. Brucie has a tattoo on his lower stomach with the words "Mommy" which is only visible in two missions when he has his shirt off. The tattoos are similar to Scott Alexander's (which also read "No. 1" and things like "First", "Winner" and "Best" in Japanese), although Scott says of the tattoos on his website "I have these tattoos not because I see myself as the best or number one, but because [...] every time I look at one of my tattoos, even if I feel tired or ill, it charges me with adrenaline". Also, on his lower back are the two Chinese characters "人妖", the direct translation of which means "human demon", but is a colloquially slang for transsexuals.

Brucie's attitude towards life has also attracted many friends, including Roman Bellic, who aspire to live like him (Roman and Brucie met through his website). Eventually, Roman introduces Brucie to his cousin Niko, who starts to work for Brucie, as well as forming an "odd couple" friendship (Brucie's attitude of loud, egotistical, self-centered and impulsive are the complete opposite of Niko Bellic's; nonetheless, the two become good friends over time). Despite his protestations that he is not Russian, Niko is praised by the oblivious Brucie for his "Red Army" fighting and driving skills.

At first it appears as though Brucie is working for some sort of crime boss, as he orders Lyle Rivas killed for cooperating with police, his car stolen and his gay cousin Tom killed by Niko for debts. Niko later learns that Brucie is largely a legitimate business owner (though his Executive Lifestyle Auto shop is a "chop shop"), and not involved in organized crime - it is implied that the missions he set you were unnecessarily violent, mostly fueled by 'roid rage. Brucie, however, does not contradict the justifications for his prior missions (silencing snitches, etc).

Following this revelation, Niko ends the business relationship with Brucie, however the two remain friends and socialize often. Brucie introduces Niko to the world of underground street racing as well, along with a stolen car ring. First, Niko performs a series of thefts for Brucie through email listings, and then eventually he is introduced to a colleague named Stevie, whose list is much more difficult to attain - Brucie's requests take the form of mini-missions, with markers designating the vehicle locations, whereas Stevie's requests merely specify the make of the vehicle, and its general vicinity. Brucie also tips Niko off to a vigilante system set up by the Liberty City Police Department, where they have contracted out assassinations to vigilantes like Niko through a "Most Wanted List". 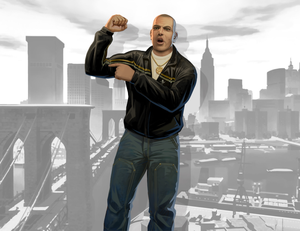 Brucie is one of the few characters from the original GTA IV that actually engages with Luis in extended dialogue, often appearing along with Roman either inside, or trying to get into, Maisonette 9. During the missions for Mori Kibbutz, light is shined on Mori's and Brucie's relationship as brothers, mostly consisting of Mori ridiculing Brucie at every turn. During the final mission No. 3, Brucie, having taken enough abuse, breaks Mori's nose, finally besting his brother. Towards the end of the game, Brucie awkwardly attempts to kiss Luis, but later denounces it as a test of Luis' masculinity (see above).

In the ending credits it reveals that Brucie and Mori entered themselves into the L.C. Fight Club and are seen fighting in the cage.

Retrieved from ‘https://www.grandtheftwiki.com/index.php?title=Brucie_Kibbutz&oldid=395916’
Categories:
Cookies help us deliver our services. By using our services, you agree to our use of cookies.