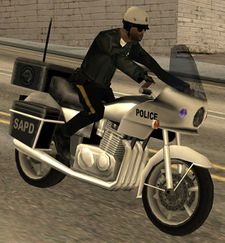 Motor officers in GTA San Andreas ride HPV-1000 motorcycles, which, like other motorbikes, are far more maneuverable, agile and compact than cars. The use of motorcycles also allows them to shoot their pistol at any direction from their bike while pursuing a criminal, even with only a one-star wanted level. Motor officers are only found within cities in San Andreas.

They come with uniforms consisting of a black with white turtle shell helmet, black leather jacket, biker boots, sunglasses, fingerless gloves and black striped pants, are armed with nightsticks and pistols, and are depicted as African American men (with African American accents). Their attire, as well as their choice of motorcycle, apparently mirrors those used by Los Angeles motor officer units during the early 1990s, as well as the depiction of both a T-1000 assuming the guise of an LAPD motorcycle officer in 1991 film Terminator 2: Judgment Day and one of the "Death Squad" SFPD motorcycle officers from the 1973 film Magnum Force.

Like SWAT teams, motor officers in GTA San Andreas are the only police force around the state of San Andreas that are consistent in all areas. (e.g. Rural Police are found in respective areas and each city has a different police force). For that reason, they sport San Andreas Police Department markings.

Motor officers behave like all other members of the police, and will brandish a gun if you brandish one, the only extra behavior perk is that they will shoot you from their bikes regardless of your wanted level. Motor officers usually chase you when you have a one-two star wanted level. They will more often than not back off after you get too many stars. 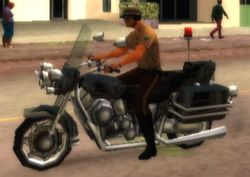 A motor officer on a VCPD Wintergreen in GTA Vice City Stories.

Motor officers in GTA Vice City Stories are similar to those in GTA San Andreas in various regards. They don similar equipment, including a beige turtle shell helmet, sunglasses and boots (but otherwise feature the same beige-and-brown Vice City Police Department uniforms), as well as the standard issue nightsticks and pistols. However, the police ride VCPD Wintergreens, a police variant of the Wintergreen.

As are motor officers in GTA San Andreas, GTA Vice City Stories's counterpart will only chase the player at a one to two star wanted level, until faster, stronger, and all around better VCPD Cruisers arrive to chase them.

Retrieved from ‘https://www.grandtheftwiki.com/index.php?title=Motor_Officer&oldid=370275’
Categories:
Cookies help us deliver our services. By using our services, you agree to our use of cookies.