Exterior of the North Point Mall in GTA Vice City.

The North Point Mall is a two storey mall with a H-shape floorplan. It is arguably one of the largest enclosed malls in the GTA series, featuring a massive atrium bisected by a central pedestrian bridge, and a large number of businesses primarily based on the edges of the floorspace; the mall also comes equipped with escalators, as well as access to an adjoining multistorey car park and six street level entrances.

In GTA Vice City Stories, the aesthetics of the Vice Point Mall circa 1984, two years before events in GTA Vice City, is significantly different but more detailed. Aside the inclusion of different tenants and deeper store interiors, the second floor corridors of the mall is lined with yellow lampposts (in place of overhanging ceiling lights in GTA Vice city), and the central space features hung models of a moon landing probe similar to the one seen at an InterGlobal Studios soundstage in GTA Vice City, and a World War II-era fighter plane. Other stylistic differences include new wall textures, vines hanging from the second floor corridors (ala-the Washington Mall), a security booth in the place of an information counter on the southern half of the mall, and advertising billboards near the mall's entrances. With the exception of the omitted signs that reference its earlier "North Point Mall" name, slightly improved landscaping and a gray roof in place of a dark blue one, the mall's exterior is otherwise identical. 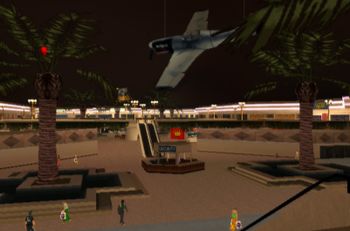 The redressed interior of the "Vice Point Mall" in GTA Vice City Stories, as viewed to the north.

Stores in the mall range from clothing and firearms retailers to record stores and eateries. Circa 1986 (the timeline of GTA Vice City), there are two weapon stores in the mall, one for firearms and the other for melee weapons. The latter does not appear in the GTA Vice City Stories rendition for unknown reasons. The food court in the mall can also be used in GTA Vice City to replenish the player's health if it is below 100.

In addition, the GTA Vice City rendition of the mall features an Infernus on display intended as a prize from the mall's annual charity raffles; players can easily steal the car at the cost of gaining police attention (due to the car's alarm activating the moment the player enters). In GTA Vice City Stories, a BMX takes the place of the Infernus, but attempts to steal the bike following "From Zero to Hero" will automatically activate the "Mashin' Up The Mall" checkpoint side-quest.

In GTA Vice City, the "turf" inside the mall has been claimed by the local Sharks gang, but the actual stores pay protection to the Vercetti Gang. A common occurrence in the mall is groups of leather jacket-clad men occasionally engaging in fights with the Patrol Invest Group (PIG) security and Vice City Police Department officers. As they are within Sharks territory, these men are believed to be members of the gang, but people who are dressed similarly appear across the entire city, making this unlikely. In night time, the Sharks appears inside the mall, frequently engaging in gang wars with PIG guards, and possibly police officers, if the cops attack either two of them with nightsticks.

In GTA Vice City Stories, there is no gang presence within the mall, but PIG guards and police officers are still common, although they do not react in any hostile manner against each other.

Retrieved from ‘https://www.grandtheftwiki.com/index.php?title=North_Point_Mall&oldid=375643’
Categories:
Cookies help us deliver our services. By using our services, you agree to our use of cookies.