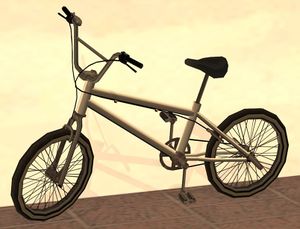 A BMX in GTA San Andreas.

One of the BMX's major advantages is its invulnerability and maneuverability. In addition to its compact size, the BMX also allows the player to execute super high bunny-hops along with the standard fare of wheelies and stoppies. In GTA Vice City Stories, players can only execute a low bunny hop using the BMX.

The BMX's top speed, however, is wedged between that of the Bike and the Mountain Bike, and is not considerably fast as a result. The BMX is also unintended for off-road use, as the bike is unstable on bumpy terrain, resulting in the player being prone to dismounts from the bike and the resulting injuries; neither is it suited for getaways when pursued by cops.

The BMX can be seen ridden by pedestrians or spawned in specific locations in GTA San Andreas; in GTA Vice City Stories, however, it only has spawn points and never used by anybody in the game but the main character.

Retrieved from ‘https://www.grandtheftwiki.com/index.php?title=BMX&oldid=392666’
Categories:
Cookies help us deliver our services. By using our services, you agree to our use of cookies.