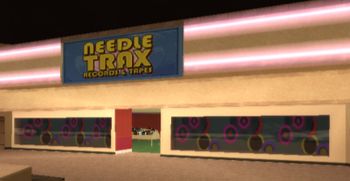 Needle Trax a small chain of music retailers featured in Grand Theft Auto: Vice City Stories and based in Vice City in 1984. There is a total of two Needle Trax outlets in the city: One in southern Downtown and another at the Vice Point Mall in Vice Point, on the mid-eastern side of the mall.

The lack of a presence in Grand Theft Auto: Vice City implies Needle Trax is either no longer in operation, has moved, or has been rebranded by 1986; the Downtown outlet is occupied by Rock City, while the mall outlet lacks any signage.