The Zip brand is commonly associated with consumerism in the series, prominently featured in both Grand Theft Auto III and Grand Theft Auto: Liberty City Stories on shopping bags carried by certain pedestrians in the commercial districts of Newport and Belleville Park in Staunton Island, Liberty City; Zip boxes may also be found in the rear compartment of certain Landstalkers, implying the vehicle is used to transport excessive amount of purchased Zip merchandise.

In Grand Theft Auto: Vice City, the Zip brand is replaced by Gash, which shares the same logo design as Zip; however, Zip logos are visible on certain vans and Hotring Racers in the game. The game also features a two-storey Gash outlet at the North Point Mall in Vice Point, Vice City, which prominently features a "Casual" clothing pickup (a simple outfit consisting of jeans and a T-shirt) in front of the second floor entrance, and is also incorporated into the mission "Shakedown" as one of the outlets the player is required to intimidate for protection money; in Grand Theft Auto: Vice City Stories, the Gash outlet has yet to open circa 1984 as renovation works on the store is either underway or has yet to begun.

The Gash brand is also promoted on a blimp that floats hundreds of feet above Downtown Vice City.

Zip serves as a chain of interactive clothing stores in Grand Theft Auto: San Andreas, unlocked upon completion of "Are You Going to San Fierro?"; the outlet serves as a mid-range clothing retailer ranked between Binco and Sub Urban, and ProLaps, Victim and Didier Sachs, selling clothes priced moderately. The chain boasts a total of four outlets all over San Andreas:

In addition, an eight storey building in King's, San Fierro, features scaffolfing with banners that sport the Zip logo and an announcement that the building would house a Zip outlet ("New Store Open Soon - Six More Floors of Khakis"; the end of "Khakis" is partially obscured by paint, appearing to read "Khak"). 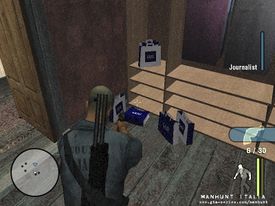 The player in Manhunt aiming their gun at Gash bags similar to those found in GTA Vice City.

Gash is one of several fictional brands from the GTA series that is featured in Manhunt, another Rockstar North game. Specifically, Gash bags can be found in the Reporter's Apartment in Carcer City.

Clothing on offer from Zip primarily consist of mid-range casualwear that are not primarily suited for use among gang members, as nearly all of the clothing lack the green gang colors of the Grove Street Families, as opposed to those found in Binco and Sub Urban. However, a few generic clothing from Zip (T-shirts and hoodies) are in fact recolors of clothing seen in other stores, and Zip is also the only clothing store that offers rugged street or hiking boots.

Retrieved from ‘https://www.grandtheftwiki.com/index.php?title=Zip&oldid=416594’
Categories:
Cookies help us deliver our services. By using our services, you agree to our use of cookies.