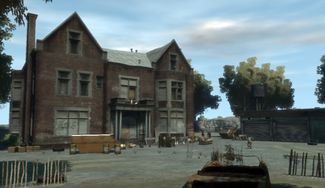 The old mansion, north of Westdyke.

An unnamed and abandoned mansion can be found in Grand Theft Auto IV, on top of the hill in Westdyke, Alderney. There are few garages next to the mansion and behind them is a parked Sultan RS. Usually there are some workers around the mansion and some Tramps by a fire. The mansion is the setting for the missions "Truck Hustle" and "To Live and Die in Alderney", both in which the game instructs the player to reach the old mansion. Its garage was used to store the heroine that was stolen from the Triads by Niko.

Retrieved from ‘https://www.grandtheftwiki.com/index.php?title=Old_Mansion&oldid=364421’
Categories:
Cookies help us deliver our services. By using our services, you agree to our use of cookies.