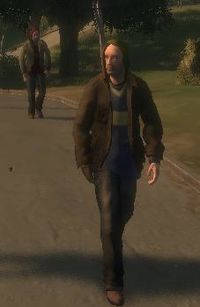 Tramps, or commonly Hobos, are homeless and usually careless people found in most of the Grand Theft Auto games. They have different appearances in different games and in Grand Theft Auto IV tramps will often ask the player for money.

Each game in the GTA III and IV era has its own unique tramp models:

Tramps usually wear grey jackets in Grand Theft Auto III and they walk strangely. Some tramps wear checkered hats that appear to have been cut off of a western shirt. A group of tramps can be found in the tunnel that connects 8-Ball's bomb shop in Harwood to the rear of the Supa Save! in Portland View; they carry molotov cocktails, which either suggest they are remnants of Darkel's gang or are used as an ingame substitute for alcohol.

Tramps in Grand Theft Auto: Vice City appear in five character models. The first is a shoeless tramp with a brown jacket and red top. He has black pants and will attack the player if provoked. The second is a begger with a light brown tattered shirt and dirty jeans, this beggar is also barefoot and will run away from the player if a fight is started. The third is a begger who is the same as the second begger except his tattered shirt is black. He is an Vietnam War Veteran who will make comments about the war if the player is around him. He too is a cowardly pedestrian who will run away from the player. The other two are hunchback women tramps, one with a green top and jeans and one with a yellow top, they will both fight back if provoked. Tramps are usually found in Little Haiti, Little Havana and the construction sites in Vice Point. Hobos also walk funny in this game.

Tramps appear all throughout San Andreas, in many varieties, one appears in Los Santos, the majority appear in San Fierro, others appear elsewhere. Some tramps in San Andreas have signs on their chests saying odd things like; "Will bet for money", "Will eat for food", or "God is playing with us" (a reference to the tramp's existence in a video game). Sometimes tramps will attack you if provoked. In beta versions of the game, they may be seen drunk, pissing on the ground or sitting down. These effects can still be achieved in the full version by modifying the game's script. Tramps often have a low amount of health.

There are many different types of tramps in Grand Theft Auto IV. Most tramps wear light green or brown hoodies with random shirts underneath. Some hobos have extremely ugly facial features such as one eye being completely white. The GTA IV version of hobos' dialogue in GTA IV is quite odd. Some talk about aliens, the government and illegal immigrants. Tramps may sometimes ask the player for money, the player can then give them $10. They can say things like: "Can someone make a donation please!?" ; "A small buck for the alien resistance"; and "Could you spare a dollar? I'm trying to get back to the office." Some tramps are genuine homeless people with nowhere to go. Other tramps are obvious drug addicts. Tramps are aggressive and will fight with their fists if provoked. Sometimes they are even rude, saying things like: "Fuck off you stupid fucking great alien fuck!"; and "Fuck you, reptilian"; or simply "Fuck you". Tramps are found all over Liberty City. They are found in populated areas such as Middle Park, Westminster, and Star Junction. Many can be found in the subways, the Alderney Casino, the Sprunk Factory, apartments, the Firefly Island theme park beach, the northern beach in Northern Gardens, Bohan, and dark alleyways. Tramps can sometimes be found sleeping on the ground. Tramps can also be found around a drum of fire trying to warm themselves. A strange thing is that they can be seen driving cars sometimes.

Tramps will be returning, and in great numbers, as seen in the Grand Theft Auto V trailer, however they're part is left uncertain at the moment. They will appear more prominently under overpasses or intersections with camps set up. It is presumed they will be pretty much the same as in Grand Theft Auto IV.

Retrieved from ‘https://www.grandtheftwiki.com/index.php?title=Tramps&oldid=384786’
Category:
Cookies help us deliver our services. By using our services, you agree to our use of cookies.