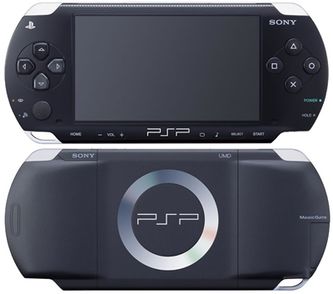 Front and back of the PSP (black version)

The PlayStation Portable, or PSP for short, is a handheld games console made by Sony under the PlayStation brand. It was launched in Japan on December 12, 2004, and debuted in North America on March 24, 2005. The computing power of the PSP is comparable to that between the PlayStation 1 and PlayStation 2, being capable of rendering significantly complex 3D graphics to a less detailed extent than the PS2. The console is also capable of supporting network play.

Grand Theft Auto: Chinatown Wars has also been ported to the system in late-2009. The PSP version of the game had extra missions and more enhanced graphics than the Nintendo DS, iPod Touch and iPhone versions of the same game.

There are, as of 2011, three generations of the PSP. A spin-off, the PSP Go, has been created and released by Sony (although it is now unavailable outside of North America).

The PSP has now been superseded by the PlayStation Vita, released in 2011/2012.

Wikipedia has an article on:
PlayStation Portable

Retrieved from ‘https://www.grandtheftwiki.com/index.php?title=PlayStation_Portable&oldid=368416’
Category:
Cookies help us deliver our services. By using our services, you agree to our use of cookies.