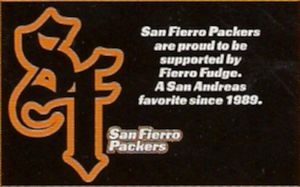 Logo of the San Fierro Packers.

The San Fierro Packers are a fictional professional baseball team based in San Fierro making it the second sports franchise in San Fierro after the 69ers, and one of three known baseball teams in San Andreas (the others being the Las Venturas Bandits and the Los Santos Saints, supposedly forming some sort of rivalry).

Their logo makes a resemblance to their real-life counterpart, the San Francisco Giants.

As the team is sponsered by Fierro Fudge, it can be assumed that the name is a reference to fudge packer, a derogatory term for a homosexual. It's also possible the team is named after the Green Bay Packers, since the Giants while in New York shared the same name as a football team based in the same city. This may imply that, at one point, the (San Fierro) Packers were based in Wisconsin in the GTA universe, but moved to San Fierro, a reference to the constant relocation of many sports teams in the 20th century.

Retrieved from ‘https://www.grandtheftwiki.com/index.php?title=San_Fierro_Packers&oldid=376685’
Categories:
Cookies help us deliver our services. By using our services, you agree to our use of cookies.