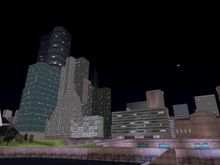 Skyline of Staunton Island at night in GTA III.

The following list shows the tallest buildings in Liberty City, according to their height. The tallest building in the city is the Jefferson St. Credit Union building in Staunton Island, with a height of 437.6 m (1433.7 ft), which manages to position itself as the highest until 2001, because this was under construction. The second tallest building is a unnamed building of style art deco, measuring 391 m (1 282.8 ft) high, between Bedford Point and Torrington. This building is the tallest of the city, when the Jefferson Building was under construction, but until 2001 ceases to be and become the second highest. The third highest is the FBC Financial Group headquarters in Torrington, while the fourth is the Love Media Building with 219 m (718.5 ft). Other buildings that are not financial, but manage to rank among the highest are the Hope Medical College in Shoreside Vale is located in the range 9 to Portland Big Brown in Portland, in the range 10. Finally in the last positioned himself (among the highest) is the AmCo Headquarters with 147 m (482,3 ft).

List of the tallest buildings in the state of San Andreas 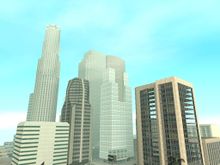 Some skyscrapers of Downtown, Los Santos.

The following list shows the tallest buildings in State of San Andreas. Statewide, the largest building is Los Santos Tower with an altitude of 317m (1,040 ft), which is also the largest of Los Santos. This skyscraper is one of the most important points from the Downtown of Los Santos, located next to other large buildings in the city. The second tallest building in the state is the San Fierro Tower of 298 m (977.6 ft) high, located in Downtown of San Fierro. It is a triangular-shaped building, with an open space running through the building. Located in Financial (San Fierro), is another building of 276 m (905.5 ft) called "Big Pointy Building" which is the third tallest building in the state and the second in the city. While in Las Venturas is the tallest building is The Emerald Isle casino with 154.8 m (507.8 ft), located on the northernmost part of The Strip.

Retrieved from ‘https://www.grandtheftwiki.com/index.php?title=Tallest_Buildings_in_GTA_III_Era&oldid=417054’
Categories:
Cookies help us deliver our services. By using our services, you agree to our use of cookies.