The skyscraper's name is not official, but taken from its model file mrngstarbuild. 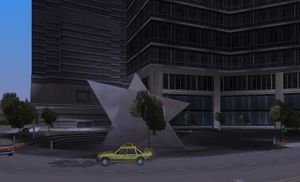 Standing 191.5 m (628.2 ft) high and based on the Trump Tower in New York City, the building's floor plan is a truncated rectangle where one of the corners form a stepped garden. It has glass panel façade which gives it overall blue colour. When seen from far away, it practically seems invisible as it visually blends, with it's similar façade and small height, with the much larger Jefferson St. Credit Union building. Above the entrance, there is a white star logo, similar to the sculpture on the plaza in front.

The building is directly across the street from a local subway station on the western side.

The signature plaza in front of the building contains steps encircling the denivelated plateau with the prominent transparent sculpture of a star (actually two blended triangular prisms), probably the "Morning Star", a logo of Morning Star Industries.

In Saints Row The Third, a GTA clone released 10 years after GTA III, there is an enemy gang called the Morningstar that also occupy a skyscraper.

Retrieved from ‘https://www.grandtheftwiki.com/index.php?title=Morningstar_Building&oldid=386114’
Categories:
Cookies help us deliver our services. By using our services, you agree to our use of cookies.