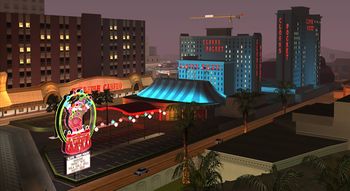 The Clown's Pocket as viewed from The Strip, Las Venturas in GTA San Andreas.

The Clown's Pocket is based on the real life casino Circus Circus in Las Vegas, and its name is a slang term referring to a sagging vagina.

The casino hotel is located along The Strip in Las Venturas, San Andreas, between Starfish Casino and Caligula's Palace, and located across The Visage. It houses The Clown's Pocket Safehouse, which is a hotel suite that protagonist Carl Johnson may purchase for $6,000. Though the hotel suite is accessible, the player is not able to access the casino.

The casino hotel's compound includes a construction site on the northeastern section which is seemingly inspired by Circus Circus' then incomplete Adventuredome, which is only completed in 1993 (GTA San Andreas is set in 1992). The construction site features is a functional magnetic crane, which can only be used to pick up nearby crates, since vehicles passing by are too far away to be reached by the crane.

Retrieved from ‘https://www.grandtheftwiki.com/index.php?title=The_Clown%27s_Pocket&oldid=363141’
Categories:
Cookies help us deliver our services. By using our services, you agree to our use of cookies.