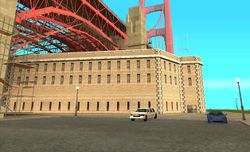 The Pleasure Domes Club is a private strip club in Grand Theft Auto: San Andreas, located at Battery Point in San Fierro, underneath the San Fierro end of the Gant Bridge. It is owned and operated by Jizzy B. It has a large interior, with more than one floor. The Pleasure Domes served as a base of operations for the Loco Syndicate until their disbanding in 1992. The place is notorious for being the main headquarters for Jizzy's prostitution ring and keeping drug dealers as its main customers. The Pleasure Domes interior is only accessible to the player during the mission Ice Cold Killa. The Pleasure Domes is based on Fort Point in San Francisco, California.

Retrieved from ‘https://www.grandtheftwiki.com/index.php?title=The_Pleasure_Domes_Club&oldid=410733’
Categories:
Cookies help us deliver our services. By using our services, you agree to our use of cookies.