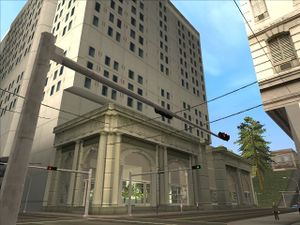 The Zombotech Corporation is a large commercial/industrial business entity headquartered in Downtown, San Fierro, San Andreas. Housed in a large square building in Downtown, this corporation is one of the largest in the city. Their headquarters are well designed and interesting, featured a glass foyer that is accessible and a huge sculpture shaped similarly to a DNA strand at the center of the building. Towards the rear are inaccessible elevators.

The building is featured in "Jizzy" as a hotel wherein Carl Johnson has to drop off one of Jizzy's girls. The DNA strand is a snapshot location and a camera pickup can be found nearby. A Sparrow helicopter can be found on roof of building, although the roof is only accessible with a jetpack or an aircraft, preferably another helicopter.

Retrieved from ‘https://www.grandtheftwiki.com/index.php?title=Zombotech_Corporation&oldid=362521’
Categories:
Cookies help us deliver our services. By using our services, you agree to our use of cookies.