A Ride in the Park 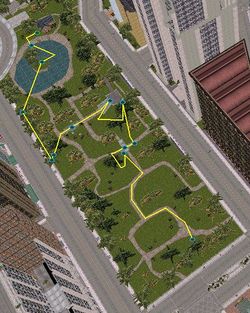 An effective route to take across Belleville Park during "A Ride in the Park" in GTA III.

A Ride in the Park is a side mission in Grand Theft Auto III which is triggered when entering the parked Landstalker near the barn in Belleville Park. It is a checkpoint mission like Patriot Playground and Gripped!, except for the fact you're in a Landstalker which is a lot less stable on bumps than the Patriots in the other off-road missions. There are 12 checkpoints in this mission, which may be collected in any order. A timer starts once you've gone through the first checkpoint. Each checkpoint gives you a 10 second bonus, giving you a theoretical two minutes (120 seconds) to complete the mission. As with the other two missions, you will fail the mission if you run out of time, if you exit the vehicle, or if your vehicle is destroyed (most likely flipped on its roof).

You may fail several times by flipping your Landstalker, but don't worry. From the beginning of the mission, pick up the checkpoint on the jetty. Then drive in the water, and hit the sloped checkpoint right, don't hit sideways or your car will flip. Go south, the 3rd and 4th ones are on the west side of the park. Just drive along the wall. Your car will take some damage, but not enough to make it explode. Drive through the bathroom stairway where Ray gives you missions, and to the monument in the east side of the park to get the 6th checkpoint. Reverse, and then pick up the 7th checkpoint on the south side of monument. Go under the bridge from east to west, and climb up to pick up other checkpoints, this is the time many players will flip their cars so be careful. The last checkpoint is in the south part of the park, but drive along trails to reduce the chance of flipping. You should now have all the checkpoints, and a $30,000 reward.