The Patriot is an off-road vehicle in the Grand Theft Auto franchise that spoofs the AM General HMMWV and Hummer line of heavy SUVs.

In GTA III and Liberty City Stories, it is popular as a civilian SUV, often found in Portland and Staunton Island. In GTA Vice City, GTA San Andreas, and GTA Vice City Stories, however, the vehicle is reserved for military use, reflecting the adoption of the HMMWV at the time and the civilian Hummer having yet to gain the popularity that it would in later years. These military Patriots come with four different bed configurations.

The design of the Patriot undergoes only minor cosmetic changes for most of the GTA III era. The GTA San Andreas rendition, however, features significant modifications on the body which present the Patriot as a more rugged, off-road vehicle. This Patriot features a shortened truck bed, slanting A and C pillars, a vehicle snorkel (which unfortunately does not allow the truck to wade in water) and redesigned front and rear fascia.

During development, the Patriot in GTA III was previously known as the "Hum Vee", after the HMMWV's "Humvee" nickname. The Hum Vee differs from the Patriot in its particularly low ground clearance, and in the front of the vehicle being more similar to the real-life Humvee's.

The Patriot in GTA IV is redesigned based on the Hummer H1's successor, the 2003-2009 Hummer H2, and carries the Mammoth marque. Unlike its predecessors, the GTA IV Patriot's design does not appear to be intended for rugged off-road used, featuring low-profile tires (which may or may not be aftermarket) for one. Some Patriots may come with American flag vinyls on the side, and also emit engine sounds much like the Ford Mustang GT from the Need for Speed games.

The GTA V rendition of the Patriot is based on the GTA IV rendition, however additional options may be featured in the future.

The GTA III Era Patriot has medium top speed, due to its heavy weight. It is very durable, and has outstanding off-road capabilities, mainly because of high ground clearance, unusual width, and suspension. It can climb very steep gradients due to its low gear boost, and does not roll, due to the low center of gravity. Because it has a low gear boost, its engine sounds big, and it is average speed for a large, heavy SUV, it wouldn't be a bad idea to assume that the Patriot has a turbocharged V8.

The GTA IV rendition is similar but has some changes. It is ridiculously heavy for an SUV, and as a result cannot go particularly fast, with a top speed of 84 mph (135 km/h) limiting its usefulness in high speed chases. Its engine seems to struggle to pull the weight, but is not easily stalled by crashes. The Patriot can practically drive over most small objects including cars to fences. The Patriot is also top heavy, and has a propensity to roll over in extreme turns. However, it is extremely durable as a result, able to soak up bullets and crashes and keep going. Its suspension is incredibly soft, causing immense body roll and roll oversteer even on slight turns. The Patriot lacks in the ability to turn well, due to its large turning circle, and as a result has to be slowed down to go round any sort of bend.

The off-road performance of GTA IV's Patriot is, as expected, excellent, with high ground clearance, good approach and departure angles, and the engine has enough power to pull the car up steep sandy hills without trouble. The Patriot is also very much capable of literally running over smaller vehicles, which makes it an excellent choice when being chased by small police cruisers. Like many heavy duty trucks, its engine lid is hinged to the front, and will not fly off if an impact dislodges it.

Due to its weight, durability and speed, the Patriot can plough through most traffic quite easily, even flipping smaller cars, SUVs, small trucks, and other Patriots. 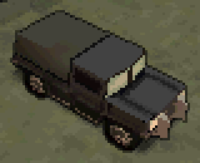 In GTA Chinatown Wars, a dark gray bulletproof variant of the Patriot is only available from the Auto Merchant in BOABO, unlocked only by rolling five pancakes in the Peking Duck Hunt game at the Rockstar Games Social Club. 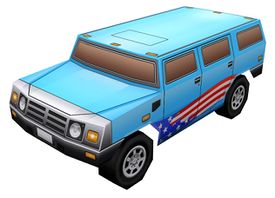 A rendering of the papercraft Patriot from the GTA Chinatown Wars section of the Rockstar Games Social Club.

Retrieved from ‘https://www.grandtheftwiki.com/index.php?title=Patriot&oldid=415452’
Categories:
Cookies help us deliver our services. By using our services, you agree to our use of cookies.