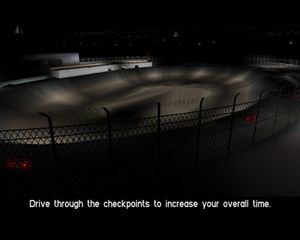 The introduction to Bloodring in GTA Vice City. 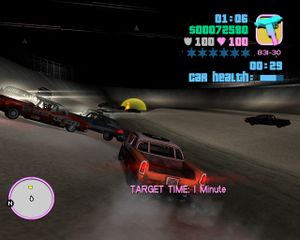 Bloodring is a destruction derby side-mission in Grand Theft Auto: Vice City, one of the three events that takes place at Hyman Memorial Stadium.

The goal of the mission is simple, to acquire enough time extensions to increase the ticking timer's remaining time to a specific amount. To do so, the player is required to drive a Oceanic-based Bloodring Banger around a bowl-shaped arena and reach individual yellow checkpoint that may be located at any part of the arena, starting with 30 second in the timer; each checkpoint adds 15 seconds to the timer. In the first playthrough, the player is only required to amass 1 minute worth of time in the timer. However, for each time the player passes the side-mission, an additional minute is added to the required amount of time for victory, finally peaking at a 6-minute goal.

To add to the challenge of the mission, the player will be confronted with hostile drivers in Glendale-based Bloodring Bangers who will attempt to ram the player's car and hinder the player's progress. Certain competitors will also attempt to snatch the checkpoints.

Once the player's timer has amassed a sufficient amount of time, the mission ends (with the sound of an airhorn playing) and the player passes the mission. On the other hand, the player will fail the mission if their car is destroyed, or if the timer runs out.

Completion of the player's first Bloodring event is essential for completion.

Upon completion of a Bloodring mission, the player will be award $1,000, multiplied by the number of minutes the mission requires the player to accumulate. In addition, two Bloodring Bangers (both the Oceanic and Glendale variants) will spawn on the southern side of Hyman Memorial Stadium's entranceway when the player passes the mission for the first time.

Retrieved from ‘https://www.grandtheftwiki.com/index.php?title=Bloodring&oldid=413287’
Categories:
Cookies help us deliver our services. By using our services, you agree to our use of cookies.